Getty Kathleen White, of the Texas Public Policy Foundation, arrives at Trump Tower, November 28, 2016 in New York City. President-elect Donald Trump and his transition team are in the process of filling cabinet and other high level positions for the new administration. (Photo by Drew Angerer/Getty Images)

President Donald Trump has nominated Kathleen Hartnett White to lead the Council on Environmental Quality, which advises the White House on environmental policy. The nomination is subject to Senate confirmation.

Harnett White is a notable advocate for the oil and gas industry in Texas, and is currently on staff at the Texas Public Policy Foundation, a conservative think tank where she pursues an agenda similar to President Trump’s of environmental deregulation and prioritizing fossil fuels over renewables.

“Kathleen is clearly highly qualified, adept and has a breadth of experience,” said former CEQ head James L. Connaughton of the appointment. Connaughton is a proponent of climate change science who lead the council under George W. Bush.

Qualifications aside, some fear that Trump’s nomination of another climate change denier to a key advisory position signals that the administration has more plans to roll back Obama-era environmental protections.

“If Hartnett-White joins Administrator Pruitt, polluters will stroll through the front doors of both the EPA and the White House, no questions asked, as the rampant looting of environmental and public health protection policies continues,” president of The Environmental Working Group Ken Cook said in a statement responding to Hartnett White’s nomination.

Here’s what you need to know about Kathleen Hartnett White:

1. She Thinks Climate Change Advocates Are “Alarmists” Who Are Part of An “Apocalyptic Anthropogenic Global Warming Cult”

Hartnett White has on multiple occasions indicated that she does not support the validity of climate change science, and that she believes the International Panel on Climate Change overestimates the impact human technology on the environment.

At a November 2011 forum held by Koch-backed advocacy group Americans for Prosperity, she told participants, “There is no environmental crisis—in fact, there’s almost no major environmental problems.”

“Carbon Dioxide is not a pollutant, nor are fossil fuels the agent of death,” she said during a CO2 Coalition panel at the 2017 Conservative Political Action Conference. “[It is] an invisible trace gas that has no impact on human health even at very high levels.”

After approving a new coal-fired plant while a commissioner at the Texas Commission on Environmental Quality in 2008, Hartnett White wrote in The Hays Daily News, “Lost in the outcry over carbon dioxide are these considerations . . . CO2 represents only 5 percent of global greenhouse gas. CO2 added by human activity such as power plants constitutes only 3.4 percent of all CO2.”

Hartnett White has gone so far as to refer to the belief in global warming as a “secular religion” that she calls the cult of “Apocalyptic Anthropogenic Global Warming.”

“The official science driving global warming alarmism is based on models built to assume that natural climate variables are extremely sensitive to a relatively small increase in atmospheric CO2 from human activity. But facts on the ground contradict the climate models’ assumption,” she told The Daily Signal during an interview before the U.N. Climate Change Conference in Paris in November 2015.

2. She Doesn’t Support Renewable Energy or the Paris Agreement

GettyU.S. President Donald Trump signs H.J. Res. 38, disapproving the rule submitted by the US Department of the Interior known as the Stream Protection Rule in the Roosevelt Room of the White House on February 16, 2017 in Washington, DC.

“Renewables are a false hope that simply won’t work,” Hartnett White wrote in The Hill in 2016. “[I]ntermittent renewables are parasitic on back-up power from reliable fossil fuels,” she added.

She has often made the argument that energy is the great equalizer, and that the movement away from cheap fossil fuels toward renewables favors rich countries while constricting development for poorer countries. Upon the signing of the Paris Agreement in April 2016, she wrote in The Federalist:

There is nothing inviolable about fossil fuels. Who knows what energy innovations creative human minds will achieve? At the moment, however, there is no comparable substitute for fossil fuel or the massive, seamlessly operating energy infrastructure built around these rich hydrocarbons across the world.

In June 2014, she wrote a 36-page homage to fossil fuels for the Texas Public Policy Foundation entitled: “Fossil Fuels: The Moral Case,” in which she further argues that the cheap energy provided by fossil fuels is necessary to the industrial development of poorer nations. “Relying on the vast store of dense, versatile energy in fossil fuels, the economic growth begun in the Industrial Revolution still offers the promise of an end to abject poverty,” she wrote.

“IPCC science claims of 95 percent certainty that human activity is causing climate calamity are more like the dogmatic claims of ideologues and clerics than scientific conclusions. . . . Robust, empirical scientific research on the natural forces and natural variability of climate needs to be conducted before the industrialized nations of the world prematurely force an abrupt switch from fossil fuels to inferior energy resources,” she added.

3. She Wants to Remove Environmental Protections & Weaken the EPA

GettyEPA Administrator Lisa P. Jackson speaks during a news conference on greenhouse gases at the Environmental Protection Agency headquarters on December 7, 2009 in Washington, DC. Administrator Jackson announced that carbon dioxide and other greenhouse gas emissions pose a danger to the public’s health and welfare.

Hartnett White has often signaled her support for weakening the powers of the Environmental Protection Agency and removing burdensome environmental regulations for the burning of fossil fuels.

“[W]e don’t need regulation; we’re already doing a good job,” she told S&P Global Market Intelligence in September 2016, adding that the EPA is a “fundamental reason that economic growth has been so so slow in this country — 1.1% I believe is this year’s average.”

Hartnett White wrote an op-ed for The Hill in June 2016 titled “Restrain the imperial EPA,” in which she urged Americans to help restrain “this lawless assertion of federal regulatory power” by supporting H.R. 3880, a House bill that would strip the EPA of its authority to regulate the emission of natural and greenhouse gases. “[Obama] and his functionaries across the federal government, however, persist in trumpeting the view of more radical climate alarmists who declare that man-made global warming of apocalyptic proportion is upon on right now. When questioned about justification, the EPA typically defaults to a moral imperative to supplant fossil fuels regardless of costs or futility. And zap goes the rule of law,” she added.

While Hartnett White’s appointment will surely thrill those in favor of deregulation, critics point to longstanding environmental legislation in place prior to Obama that may be in danger: “She will more aggressively go after dismantling all environmental laws — that’s the Clean Water Act, the Clean Air Act, that’s the National Environmental Policy Act and the Endangered Species Act,” said Christy Goldfuss, former head of the CEQ under Barack Obama.

Following Trump’s election in November 2016, Hartnett White was rumored to have been considered to head the EPA, though she ultimately did not receive the appointment.

At the time, Environment Texas Director Luke Metzger told the Texas Observer that Hartnett White would be a disaster for the EPA. He accused the former Texas Commission on Environmental Quality commissioner of shifting resources away from regulatory enforcement, which “had the clear consequence of not having the resources to enforce the law when a company violates it and puts out dangerous pollution.” Metzger said it was her “greatest legacy” as a commissioner.

4. She Is on Staff at the Texas Public Policy Foundation, a State Policy Network Think Tank That Is Heavily Funded by the Oil & Gas Industry

GettyKathleen White (C), of the Texas Public Policy Foundation, arrives at Trump Tower, November 28, 2016 in New York City. President-elect Donald Trump and his transition team are in the process of filling cabinet and other high level positions for the new administration.

Harnett White is a distinguished senior fellow in residence and director of the Armstrong Center for Energy & the Environment at the Texas Public Policy Foundation. She also formerly headed its Fueling Freedom Project, which aimed to build “a multi-state coalition to push back against the EPA‘s unconstitutional efforts to take over the electric power sector by regulating CO2 via the Clean Power Plan.”

The TPPF is a right-wing research institute and a member of the State Policy Network, a national network of think tanks that support free market economic policies. According to its website, its mission is to “promote and defend liberty, personal responsibility, and free enterprise in Texas and the nation by educating and affecting policymakers and the Texas public policy debate with academically sound research and outreach.”

As a 501(c)(3) nonprofit, the TPPF is not required to publicly disclose its donors, but in 2012, a tax filing was accidentally posted on Guidestar.org, revealing the 129 donors behind $4.7 million in donations. Major companies that gave to the TPPF included Koch Industries Inc., Verizon, State Farm Insurance, ExxonMobil, TimeWarner Cable, ConocoPhillips, Chevron, Boeing, and more.

The Texas Observer also identified a number of individual contributions ranging from $5,000 to $95,000 that came from wealthy Texas businessman with ties to the oil and gas industry. Several progressive groups also donated directly to the foundation’s criminal justice reform project, including $350,000 from Pew Charitable Trusts and $175,000 from the Public Welfare Foundation.

5. She Has a Ph.D. In Comparative Religion From Princeton & Completed One Year of Law School

Hartnett White earned bachelor and master degrees in humanities and religion from Stanford University, and completed doctoral work in comparative religion at Princeton University, where she won the Jonathan Edwards Award for Academic Excellence. She also briefly attended a law program at Texas Tech University but did not graduate.

From 1987 to 1993, she was the director of private lands and environment at the National Cattlemen’s Association, then served for a year as the executive director of the Ranching Heritage Foundation. Since then, she has sat on the board of the Texas National Resource Foundation, Cattlemen’s Legal Defense Fund, and more. In the late 1990s, she started serving on natural resource boards such as the Texas Water Foundation, and Texas Water Development, where she worked when Governor Rick Perry tapped her for the chairman position at the Texas Commission on Environmental Quality.

Hartnett White served on the commission until 2007 and left behind a legacy of support for fossil fuel projects and fewer consequences for business that violated environmental regulations.

“She [Hartnett White] has been an apologist for polluters, consistently siding with business interests instead of protecting public health. Ms. White worked to set a low bar as she lobbied for lax ozone standards and pushed through an inadequate anti-pollution plan. She also voted to approve TXU‘s pollution-intensive Oak Grove coal units, ignoring evidence that emissions from the lignite plant could thwart North Texas’ efforts to meet air quality standards,” read an editorial in the Dallas Morning News upon her departure from the commission in 2007.

In 2008, she joined the Texas Public Policy Foundation, where she has directed a number of pro-fossil fuel projects. She also served on the board for GenTex Power Corporation from 2010 to 2013 and as a member of the Advisory Committee for pro-carbon dioxide CO2 Coalition, whose motto is “carbon dioxide, a nutrient vital for life.” 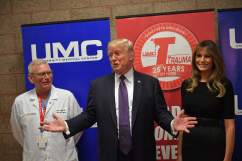 The 25th Amendment: 5 Fast Facts You Need to Know