A former police chief from New Jersey is facing federal hate crime charges and civil rights violations for allegedly assaulting a handcuffed African-American suspect during a September 2016 arrest. The federal complaint says the officer acted out of “intense racial animus” and displayed a longstanding pattern of racial hostility toward people.

1. He Allegedly Said Black People are ‘Like ISIS’ and Should be Mowed Down

According to an Oct. 1 statement issued by the U.S. Attorney’s Office in New Jersey, Nucera was arrested and charged with “committing a hate crime and violating a man’s civil rights by using excessive force during an arrest.”

Nucera was arrested over an incident on September 1, 2016, when two Bordentown Township police officers initially responded to a call from the Bordentown Ramada, complaining about two teenagers who stayed in a hotel room without paying.

The two teens were identified in court documents only as “Civilian 1,” an 18-year-old man, and “Civilian 2,” a 16-year-old girl, both African-American. The U.S. Attorney’s statement continues:

After the officers arrived and questioned the teenagers, the situation escalated into a physical confrontation, with both teens attempting to resist arrest. The officers called for backup, and numerous officers, including then-Chief Nucera, arrived on the scene.

After Civilian 1 was handcuffed and was being escorted out of the hotel by police, Nucera allegedly approached him from behind and slammed the man’s head into a metal doorjamb. A subordinate police officer later surreptitiously recorded Nucera making racist and hostile remarks about Civilian 1, Civilian 2, and African Americans more generally.

The actual criminal complaint, filed on Oct. 31, goes into more detail, including some explicit racial slurs:

I wish that nigger would come back from Trenton and give me a reason to put my hands on him, I’m tired of ’em. These niggers are like ISIS, they have no value. They should line them all up and mow ’em down. I’d like to be on the firing squad, I could do it. I used to think about if I could shoot someone or not, I could do it, I’m tired of it.

The federal complaint also alleges that Nucera had “also ordered the racially discriminatory use of police dogs to intimidate African Americans, ordering police officers to bring dogs to high school sports games or walking police dogs through certain apartment complexes solely from a desire to intimidate the African-Americans in those places.

Nucera’s alleged action of slamming a suspect’s head into a metal doorjamb took place ten months before President Donald Trump gave a speech suggesting police officers shouldn’t worry about people in their custody hitting their heads when being put into the back seats of squad cars.

2. He Retired on a Six-Figure Pension After Learning he was Under Investigation

NJ.com notes that Nucera retired “abruptly” in earlier this year, and currently collects an annual pension of $105,992.76. (Meanwhile, the first numbered footnote in the U.S. Attorney’s 11-page criminal complaint against Nucera notes that “Defendant NUCERA retired as Chief of the BTPS shortly after the Government informed the New Jersey Attorney General of the pending investigation into Nucera’s racially motivated use of excessive force.”)

On January 23, The Trentonian reported Nucera’s retirement under the headline “Bordentown Township police chief mysteriously ‘retires’,” noting that Nucera had taken an abrupt leave of absence the previous week, while Bordentown officials refused to offer any public explanations why. Mayor Steve Benowitz was quoted as saying “You will get no comments from me. I cannot discuss it because it’s a personnel matter.”

The Trentonian went on to say “The mystery surrounding Nucera’s departure is so hush-hush, the mayor wouldn’t even say who is currently leading the police department. ‘I’m not telling you anything. Goodbye,’ Benowitz said before abruptly hanging up the phone.”

At the time, the FBI would neither confirm nor deny any investigations against Nucera.

3. He Had a Particular Dislike of People from Trenton

Bordentown Township is in southern New Jersey, about 40 driving miles northeast of Philadelphia and 63 miles southeast of New York City. But it’s only six miles from the much larger (and poorer, and blacker) city of Trenton.

So when the Trentonian reported news of Nucera’s arrest, it kicked off the story by noting that “Trenton residents have feared driving through predominantly white Bordentown Township in Burlington County for years.” According to 2010 census data footnoted in the federal complaint, Bordentown’s population is almost 75 percent white, whereas the census bureau’s FactFinder page shows Trenton’s population is 52 percent black.

Unsurprisingly, the federal complaint against Nucera includes several quotes indicating that in addition to his overall animosity toward black people in general, he had a particular hatred for those coming from Trenton. In addition to his earlier quoted slur wishing a particular person would “come back from Trenton,” after his alleged assault of “Civilian 1,” Nucera was surreptitiously recorded saying that he and other people from Trenton should “stay the f–k out of Bordentown.”

4. He was Wounded During a Courthouse Shooting Three Years Ago — by his own Firearm

NEXT: One person taken to hospital from Bordentown NJ municipal building after reports of shooting. Details at 5pm. pic.twitter.com/JNeoLxgwke

In addition to Chief of Police, Nucera also used to be Bordentown’s Township Administrator. According to Bordentown Township’s municipal website, “The Township Committee is the Legislative Branch of our government and establishes policies for the administration of the various departments. The Committee appoints the Township Administrator who is responsible for carrying out those policies and overseeing the day to day operations.”

In May 2014, a gunman opened fire in the tax collector’s office in Bordentown’s municipal building. Then-police chief Nucera, acting in the guise of township administrator, was in the tax collector’s office when the shooting broke out, and when news of the shooting first caught national attention, early reports included the sensational (and true) detail that Bordentown’s own chief of police had been shot in the leg, and taken to a Trenton hospital for treatment.

Later reports indicated that Nucera has been shot with his own gun, and that accidental gunshot was the only actual shot fired during the municipal-building shooting incident.

Police later claimed that an unnamed preteen whose parent was conducting business in the tax office somehow got his hand on Nucera’s still-holstered weapon and fired a shot.

5. His Son is Also a Bordentown Police Officer

Frank Nucera Jr., is also charged with slamming a black teen's head into a door jam & other violent acts against POC. #BLM pic.twitter.com/KUPwngl1Zn

In July 2016, the Trentonian reported an incident from 2011 allegedly involving the younger Nucera: according to Rev. Mark A. Broach, the African-American pastor of the Trenton Deliverance Center, then-Patrolman Nucera pulled a gun on him after pulling the pastor over at a gas station. Police countered that Nucera III drew his weapon, but did not point it at Broach.

(Later, after seeing video of the incident, Broach conceded that Nucera had not pointed the drawn weapon directly at him, but denied having driven on the shoulder of the road — the excuse cited by Nucera to pull Broach over in the first place.) 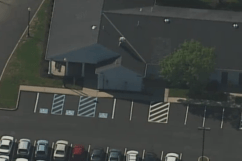 Shooting at a Municipal Court in New Jersey: 5 Fast Facts You Need to Know