Las Vegas mogul Steve Wynn is one of the latest men to be accused of sexual misconduct. According to the Wall Street Journal, these allegations stem back to 2005, just after Wynn opened his namesake casino, Wynn Las Vegas.

“Dozens of people The Wall Street Journal interviewed who have worked at Mr. Wynn’s casinos told of behavior that cumulatively would amount to a decades-long pattern of sexual misconduct by Mr. Wynn. Some described him pressuring employees to perform sex acts,” the site reported.

Wynn married his current wife, Andrea Hissom, in 2011. Hissom, who is 21 years younger than Wynn, has made several public appearances on the arm of her husband. She has not commented on these allegations of sexual misconduct.

1. ‘Dozens of People’ Have Spoken Out Accusing Wynn of Sexual Misconduct

On Friday, January 26, the Wall Street Journal published a detailed piece about Wynn’s alleged behavior, recalling one incident in particular that involved a manicurist that worked at his hotel. The incident was first uncovered after Wynn’s former wife, Elaine, filed a lawsuit in an effort to “lift restrictions on the sale of her stock in Wynn Resorts Ltd.”

Although the alleged incident was only mentioned “in broad terms,” the Wall Street Journal dug for additional information.

“After she gave Mr. Wynn a manicure, she said, he pressured her to take her clothes off and told her to lie on the massage table he kept in his office suite, according to people she gave the account to. The manicurist said she told Mr. Wynn she didn’t want to have sex and was married, but he persisted in his demands that she do so, and ultimately she did disrobe and they had sex, the people remember her saying,” the site reports.

Wynn paid the manicurist some $7.5 million, according to people familiar with the incident that spoke to the Wall Street Journal.

Wynn sent the Wall Street Journal the following written statement in response to the claims:

“The idea that I ever assaulted any woman is preposterous. We find ourselves in a world where people can make allegations, regardless of the truth, and a person is left with the choice of weathering insulting publicity or engaging in multi-year lawsuits. It is deplorable for anyone to find themselves in this situation. The instigation of these accusations is the continued work of my ex-wife Elaine Wynn, with whom I am involved in a terrible and nasty lawsuit in which she is seeking a revised divorce settlement.”

2. Hissom Married Wynn at His Hotel, Encore, in Las Vegas & Her Gown Was Compared to Kate Middleton’s

Just one day after Kate Middleton married Prince William in the royal wedding viewed by millions of people around the world, Hissom married Steve Wynn. Their wedding was dubbed the “American royal wedding,” and Hissom even wore a gown that drew comparisons to Middleton’s.

Although the gown was different in its own way, the top featured lace sleeves and a plunging neckline, not unlike that of Middleton’s.

“She even wore a white headpiece similar to that worn by the newly titled Duchess of Cambridge, although Hissom’s was unlikely to have been leant to her by the Queen,” the Daily Mail reported at the time.

The bottom of the gown was vastly different from Middleton’s, however. It featured a cream-colored satin fabric adorned with a large bow at the waist.

According to the Daily Mail, Hissom first met Wynn in the French Riviera back in 2008. The two started dating, but didn’t take their relationship public until 2009. According to Las Vegas Weekly, the two were spotted spotted enjoying some downtime on his yacht on New Year’s.

Flash forward to the end of April 2009 when Hissom and Wynn were spotted together in Los Angeles. The duo enjoyed a romantic dinner at the Polo Lounge at the Beverly Hills Hotel. This marked their very first public outing.

“She is very elegant and looks very nice! It is very cute. He grabs her waist, and she leads him into the restaurant — all very open and public. They order butternut squash soup and Fiji waters, and Steve asks for coffee. They also order ice cream for two. She is doing most of the talking, and Steve listens attentively and nods in agreement. They are obviously very much a couple, and they are not concerned at all as to who sees them and greets them,” a source told the outlet.

A short time later, however, Hissom and Wynn split. They rekindled their romance in 2010, and Wynn proposed, asking for Hissom’s hand in marriage while dining at Sinatra, an Italian restaurant at Wynn’s Encore Hotel, according to Vanity Fair. He presented Hissom with a 10-carat heart-shaped engagement ring — and she said, “yes.”

4. She Is the Daughter of Victor Danenza

Hissom was born and raised in the UK. She is the daughter of the late Victor Daneza, an international financier. Daneza “fled to France in 1976 during a federal investigation for securities irregularities,” according to Las Vegas Weekly. The site goes on to say that Daneza was known for introducing young women to wealthy men.

“Danenza ran afoul of the feds in 1976 for securities fraud and fled to France. In 1992, he got into trouble with British authorities over shady stock transactions. One source said, ‘Danenza was deported from Brunei one time after he pulled a fast one on the Sultan,'” according to Page Six.

5. She Was Previously Married & Has 2 Sons

Andrea Hissom with her son, Alex

Hissom was previously married to Robert David Hissom, a financial analyst who worked for Aspen Capital Partners Ltd. in Europe. She and Robert are the parents of two boys, Alex and British singer and songwriter, Nick Hissom. You can see a photo of Nick with his mom and Steve Wynn below.

Steve Wynn has been married twice previously. He and his ex-wife, Elaine Wynn, tied the knot in 1963 and divorced in 1986. A few years later, the two rekindled their romance and ended up getting married for a second time in 1991. Their second marriage also ended in divorce, however. Their divorce was finalized in 2010, and Elaine was paid $741 million in stock in Wynn Resorts, according to the Daily Mail.

Steve and Elaine have two children together, daughters Kevyn and Gillian. The girls, now grown, are very close. In 2011, the girls sat down for a chat with Los Angeles Confidential Magazine.

“Both sisters are low-key, engaging, and warm. They are also clearly devoted to each other. Kevyn, the elder by two-and-a-half years, just purchased a house in Gillian’s neighborhood. ‘We’ve found that our happiness increases when the distance between us decreases,’ says Gillian, who, like her sister, is a single mom. Their Sun Valley vacation homes are equally close. ‘We’re eight minutes away,’ says Kevyn. ‘I timed it once.'” 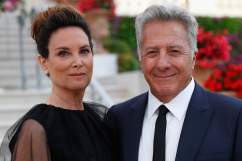 Loading more stories
wpDiscuz
0
0
Would love your thoughts, please comment.x
()
x
| Reply
Andrea Hissom is the wife of Steve Wynn. She is 21 years younger than he is. Here is what you need to know.