Sacramento Sheriff\'s Office Joseph James DeAngelo pictured in a mugshot after his arrest, next to a FBI sketch of the East Area Rapist and Golden State Killer.

The Golden State Killer – now identified by police as allegedly being a Sacramento-area man named Joseph James DeAngelo – left behind a chilling trail of evidence. It includes two voice recordings said to possibly be of the slayer, who has been accused of murdering at least 13 people in a trail of slayings that terrorized Californians in the 1970s and 1980s.

You can listen to the voice recording audio below but be aware that it’s disturbing. DeAngelo was arrested on April 26, 2018 and accused in four of the murders, with authorities alleging he is the serial killer and serial rapist. It’s not clear why the killer stopped murdering people in the late 1980s. DeAngelo worked as a police officer in the 1970s for two California jurisdictions, and he was a Vietnam veteran. He was also the married father of three daughters, although he is believed to be estranged from his wife, Sharon Huddle, a Sacramento-area attorney.

The most chilling audio recording, which you can listen to below, believed to be of the Golden State Killer, was obtained in 1978, when authorities tapped the phone of a victim and captured the sound of a man breathing heavily into the phone in a very chilling call, according to LAMag. “Gonna kill you,” he whispered, calling the woman graphic names, such as “b*tch” and “Wh*re.”

Another call, in which a male voice asked, “Is Ray there?” was also suspected by police to possibly feature the voice of the Golden State Killer, the magazine reported. You can listen to both of the calls below:

Here’s another copy of the heavy breathing call, released by the FBI, which also contains the victim’s voice. “Recording of telephone call by suspected East Area Rapist, a serial offender who terrorized California in the late 1970s and early 1980s,” the FBI wrote with the audio recording. The Golden State Killer was also given other nicknames such as the East Area Rapist and Original Nightstalker.

The FBI also published audio of the first survivor of the East Area Rapist, who is believed to be the same person as the Golden State Killer. You can listen to it here:

According to LAMag, one disturbing detail in the killer’s modus operandi was that he appeared to have a lot of knowledge of his victims and would make hang-up calls to them. He was also accused of committing 45 rapes in California during the same time frame. It’s believed that he either cased the victims’ homes or used his access as a police officer to obtain their phone numbers.

“He called both before and after attacks, perhaps to ascertain his target’s whereabouts and/or to frighten his victims with intimidating taunts,” LAMag reported before DeAngelo’s arrest.

The New York-born DeAngelo, who served in the Navy, was fired from one local police force in the 1970s for stealing dog repellent and a hammer. He may have committed some of the murders while acting as a police officer. The victims were murdered in heinous ways, with one couple bludgeoned to death with a fireplace log. In another case, a couple walking their dog together was shot. It’s not clear why the Golden State Killer stopped committing murders, at least as far as is known. Authorities say that modern DNA techniques helped them apprehend the serial killer. 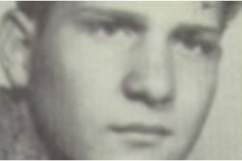