Troy Balderson was the Republican candidate vying for the congressional seat left vacant by Representative Pat Tiberi. Balderson ran against Democrat Danny O’Connor in Ohio’s 12th district and won the August special election. Balderson defended his seat in the general election on November 6.

Most political candidates bring their family members on the campaign trail. O’Connor frequently had fiancee Spenser Stafford by his side as he visited constituents. Balderson, who is currently serving in the Ohio Senate, was an exception. His family did not play any prominent role during the election. His campaign bio states that he has one son, but does not state any more detail than that.

1. Troy Balderson and Ex-Wife Angela Separated Sometime After He Became a State Senator

GettyWESTERVILLE, OH – AUGUST 07: Troy Balderson, the Republican congressional candidate, visits with campaign workers in his Westerville field office as voters take to the polls in the special election for Ohio’s 12th District on August 7, 2018 in Westerville, Ohio. Voters in Ohio’s 12th Congressional District are choosing between Democrat Danny O’Connor and Republican Troy Balderson for congress in the special election.

Troy Balderson was previously married to Angela Balderson. It’s a bit unclear exactly when the paired separated, but it was sometime after 2011.

In July 2011, Balderson was appointed to the Ohio Senate after serving two terms in the House of Representatives. His official biography at the time stated that he lived in Zanesville with Angela and their son Joshua.

The more updated version of Balderson’s biography does not include any mention of Angela. Interestingly, it also fails to mention Joshua.

2. Troy and Angela Balderson Finalized Their Divorce in 2014

Troy Balderson filed the petition for divorce against Angela, according to documents from the Muskingum County Clerk of Courts. The case type was listed as “Divorce Without Children.” Their son would have been a legal adult at this point. The online record does not list a specific reason for the dissolution of the marriage.

The complaint was filed on December 3, 2013. The court document does not indicate any major controversies or disagreements between Troy and and Angela and legally it looks as if it was a fairly smooth process. A judge granted the divorce on March 10, 2014.

The Muskingum County Auditor website also shows that Troy Balderson kept the Zanesville house after the divorce. The home was originally purchased in 1997. In March of 2014, the site lists Balderson as the sole owner.

3. Angela Balderson Has a Bachelor’s Degree From Ohio State University and Currently Works as a Human Resources Director in Dayton

Angela Balderson left Zanesville after her divorce from Troy. According to her LinkedIn page, she works for Home Instead Senior Care in Dayton. She is the Director of Human Resources and oversees a staff of more than 200 people. She began working there in 2014.

Her previous work experience also includes 15 years at the Longaberger Company in Newark. The now-former headquarters is a famous sight in Ohio; the building looks like a giant basket. Angela’s responsibilities included developing visual marketing displays for the company’s retail stores, working with art directors and photographers to design catalogue images, and training other team members.

Before that, Angela’s work kept her closer to home in Zanesville. Her LinkedIn page states she served as a manager over three boutique stores at the Buchanan Square Shopping Center.

A six-month stint in South Carolina also gives another clue as to when she and Troy separated. Angela worked as a visual manager for Stein Mart in Hilton Head from October 2013 until March 2014.

Troy Balderson has one son named Joshua. According to his LinkedIn page, Joshua graduated from the Ohio State University in 2010. He earned a Bachelor’s degree in political science and economics.

But he did not follow his father’s path into politics. The first job that Josh lists on his LinkedIn account is an Account Executive position with Time Warner Cable Business Class. He stayed with the company until 2016. But during his tenure at Time Warner, Josh Balderson also gained experience with design. He worked with a company called “I’ll Have Another” to design an IOS and Android app.

Today, he works as a Solutions Architect for DYNAMIT. It is a Columbus-based company that creates web and mobile apps. In his bio, Josh describes himself as an agile designer capable of working with various teams in order to “connect customer needs with business objectives.” He writes that he is “passionate about innovation” and “thrives in creative environments.”

5. Troy Balderson’s Family Owns a Farm and an Auto Dealership in Southeast Ohio

Troy Balderson is a native of Zanesville, a small town about 50 miles east of Columbus. His family continues to operate a farm in nearby Adamsville. The family farm is listed on the Directory of American Farmers website. On his Senate bio, Balderson states, “Growing up on my own family’s farm, I learned the value of hard work and developed a deep appreciation for the important role Ohio’s farmers play in their communities and their commitment to responsible stewardship of our precious natural resources.”

Troy Balderson also states on his campaign bio that he is the co-owner of a car dealership. He says the company has been in the family for three generations. But an online search does not reveal details about the dealership and who in the family is directly involved with running day-to-day operations. 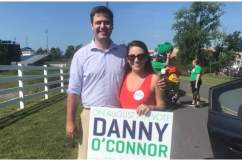