Whenever someone makes a diving catch to help preserve a no-hitter, it’s a big deal. When that diving catch comes on the no-hitter’s final out, it’s even bigger.

That’s what happened Sunday at Nationals Park, where left fielder Steven Souza Jr. made a diving catch heading toward the warning track for the final out of Jordan Zimmerman’s no-no against the Miami Marlins.

The spectacular play was captured on video from several angles, the most amazing of which was the one you can view above, shot from the left-field stands.

You can also watch the TV video of the catch here:

And a view from the right-field stands here:

Not a bad way to end a regular season in which the Nationals ran away with the N.L. East title and clinched home-field advantage throughout the National League playoffs. 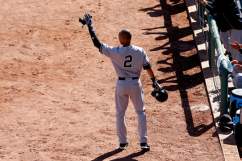