No college football game this year has gotten more hype than the Saturday night showdown between Notre Dame and Florida State, and for good reason. Both teams are undefeated and in the top 5 in the country, and the Irish would be in good position for an undefeated regular season if they can pull off the upset.

Both team has a starting quarterback who’s never lost a regular season game but who’s had his share of off-the-field issues: Notre Dame’s Everett Golson and Florida State’s Jameis Winston.

Kickoff is set for 8 p.m. at a sold-out Doak Campbell Stadium in Tallahassee.

Here’s how to watch;

ABC has the telecast across the country, with Chris Fowler and Kirk Herbstreit on the call. It’ll be a sentimental broadcast for Fowler, who hosted College GameDay’s first road show at the so-called Game of the Century between No. 1 Florida State and No. 2 Notre Dame in 1993 in South Bend.

The game will re-air at 9:30 Sunday night and at midnight Thursday morning on ESPNU.

Watch ESPN will carry the ABC telecast and a separate Spanish-language broadcast. 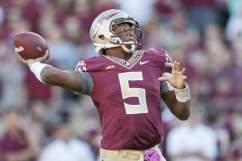 Read More
College Football, ESPN, Football, TV
Unbeaten Notre Dame takes on unbeaten Florida State Saturday night in what could be the game of the year in college football. Here's how to watch.