Bill Simmons joined Colin Cowherd on his radio show The Herd yesterday and among the many sports topics they covered, Simmons touched on Lebron James and his early seasons struggles in Cleveland and said it reminded him a little bit of when the Angels signed Albert Pujol and he struggled to play as well as he did with St. Louis.

Turns out Simmons’ co-worker at ESPN, Mike Golic, took issue with his comments about James and took some personal jabs at Simmons’ this morning on his show Mike and Mike.

“I think it’s one of the most ridiculous statements I’ve heard four games into a season in my life in any sport, that’s what I’ll say about Bill Simmons. So, you know, he grabbed a headline, which is something I know he loves.”

Bill Simmons isn’t one to shy away from confrontation, he responded to Golic’s accusations on Twitter:

What Mike and Mike did today was absolute garbage. I would say I lost respect for that show, but I never had it. http://t.co/LRd8YzFfO8

Have the balls to call me to discuss it on the show. Don't pull it out of context just because you need fodder for a segment. Pathetic.

According to Mike, they two were able to speak and work things out.

Spoke to Bill, all is good. I will discuss on show

No comment from Simmons on how “good” things are though. 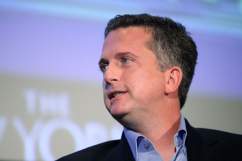 Will Bill Simmons Leave ESPN? 5 Facts You Need To Know