Auburn head football coach Gus Malzahn certainly has the ability to draw up a highly-effective offensive game plan. His ability to bust a move on the dance floor? Well, it’s pretty much just offensive.

In the above leaked video on YouTube, believed to be from Malzahn’s days of coaching Shiloh Christian (AR) High School in the mid to late 1990s, the offensive guru can be seen cutting a rug to the timeless classic “U Can’t Touch This.” An explanation of the video will do it no justice. Just be sure to make it the guilty pleasure of your day.

Maybe Malzahn isn’t exactly MC Hammer when it comes to moving to a beat. But the man has his Auburn Tigers in the National Championship hunt once again. I’m sure he’d rather have that. 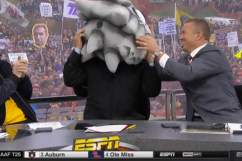