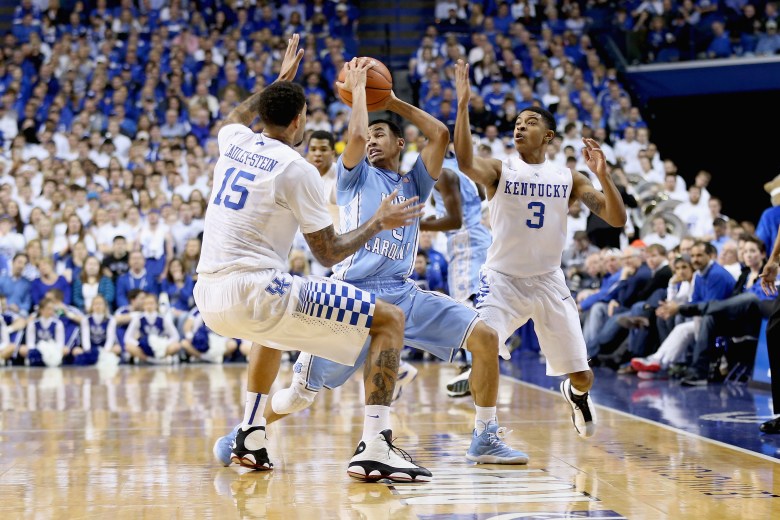 Kentucky played its first game without injured forward Alex Potthress Saturday afternoon, and the top-ranked Wildcats showed no signs of slowing down. Kentucky cruised past No. 21 North Carolina 84-70 at Rupp Arena to remain undefeated. Click here for a box score and read on for a recap.

Kentucky Was Over 50 Percent From the Field

The Tar Heels were just 27-60 from the field and made only six of 13 three pointers.

Both teams were about equal on free throw percentage, with Kentucky making 74.2 percent and North Carolina making 76.9 percent.

UK will win 11 straight games by double-digits for the first time since 1946-47. And only the second time ever.

Freshman guard Devin Booker had 15 points from the bench.

The Tar Heels got 15 points from Brice Johnson, but they weren’t enough for the team.

Tyler Ulis has 8 assists late in the 2nd half. That's the most in a game by any UK player this year and a career high pic.twitter.com/BGTmSC1A1e

Junior forward Johnson has about quarter of the teams points after going 7-11 from the field and making one of two free throws.

The Tar Heels Tried to Come Back

After being down 46-64, North Carolina scored six straight points in under four minutes to make it a 50-64 game.