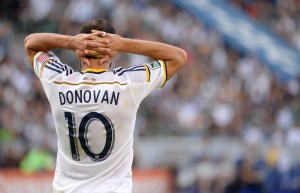 Landon Donovan ended his legendary career with a win in the 2014 MLS Cup.

While Donovan only recorded a yellow card in his last game, the fan-favorite was met by plenty of cheers from his home crowd.

The Galaxy was his second MLS team after starting his career with the San Jose Earthquakes.

He had a total of 705 shots throughout his career with 365 of them being on goal.

As such a star player, Donovan will surely be missed by the MLS for years to come.