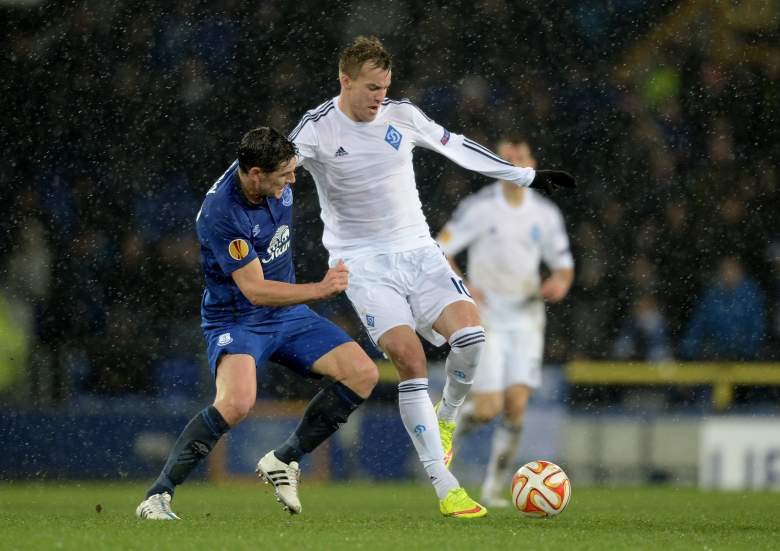 Andriy Yarmelenko of Dynamo, with the ball, is a highly rated transfer target for Liverpool. (Getty)

Dynamo Kiev midfielder Andriy Yarmelenko is in the news after a wonderful goal against Everton in Dynamo Kiev’s 5-2 Europa League win and being linked to a 29.1 Million USD (26.6 Euro, 19.5 Million Pound) move to English Premier League side Liverpool. The 25 year old midfielder has 15 goals in all competitions this season for Dynamo Kiev and is valued highly in the transfer market 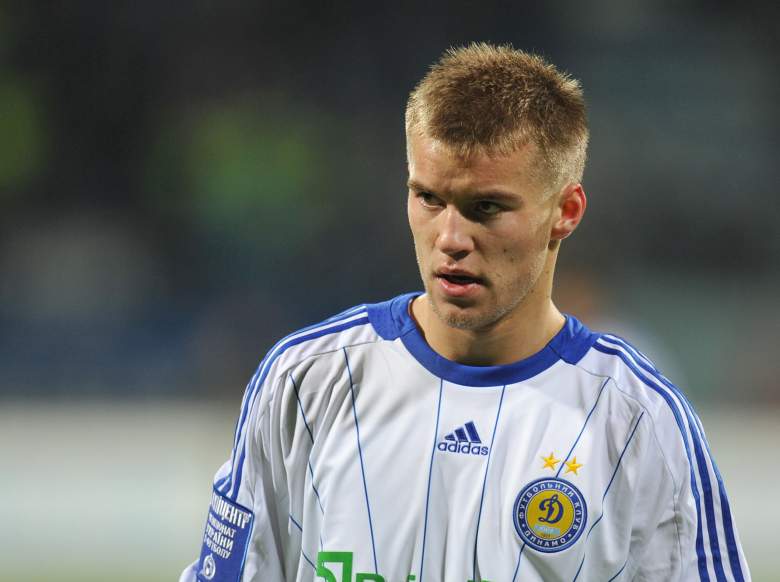 Andriy Yarmolenko, pictured in 2009, has been a stable part of the Dynamo Kiev offense for the past eight seasons. (Getty)

According to former Dynamo Kiev coach Anatoliy Demiyanenko in 2006, when asked about what he was doing to build the youth on his squad, “I was recently informed that 130km away from Kiev our scouts have found the boy who is already being called ‘the new (Andriy) Shevchenko”. Shevchenko is the top scorer in Ukrainian history, with 48 goals and the player that Demiyaneko was talking about was Andriy Yarmolenko. The 17 year old Yarmolenko moved from third divison Desna Chernigiv to Dynamo Kiev II in 2007.

He made his full debut with Dynamo Kiev during the 2008-2009 and has 247 appearances across all competitions with the Ukrainian league team. The 25 year old winger has become the best player for Dynamo Kiev over the past few seasons, leading the Ukrainan Super League in goals this season. Yarmolenko finished in the top five of goals scored in the league for each of the previous four seasons and has also added 11 assists in 2014-2015. He is known for his nifty ball handling and left footed strike. 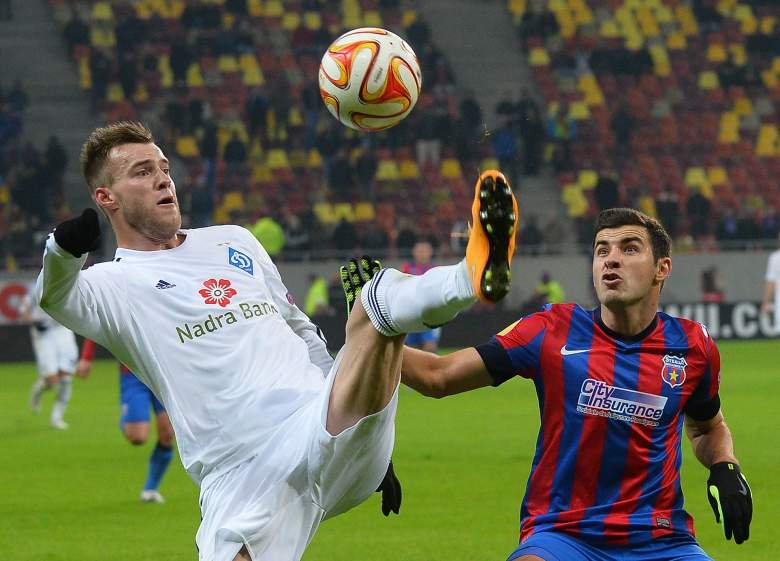 Andriy Yarmolenko was named the Ukranian player of the year in 2014 and is seeking a big money transfer. (Getty)

Yarmolenko did not sign a big money contract with Dynamo Kiev and is looking for a bigger payday with a bigger European club. Rumors have placed Yarmolenko with English Premier League teams ranging from Stoke City to Liverpool to Chelsea in the past year, showing that the talented Ukrainian is in high demand. According to Transfermarkt.com, Yarmolenko is valued at 22 million euro (16.12 million GBP, 24.08 million USD) and is only becoming more valuable, approaching the value of Barcelona winger Pedro. Teams are looking to get the Ukrainian playermaker before his value soars. He is under contract with Dynamo Kiev until the end of the 2015-2016 season.

3. He Has Excelled in European Play Over The Past Two Seasons

ANDRIY YARMOLENKO GOAL VS EVERTON F.C. | 2015 HDAndriy Yarmolenko Goal vs Everton FC Динамо Киев – Эвертон 1:0 Гол Андрея Ярмоленко Andriy Yarmolenko Amazing GOAL Dynamo Kiev vs Everton 5-2 ※ All rights of video clips belong to UEFA and FIFA !!! I'm not intended to violate any Condition of Use. Copyright Disclaimer Under Section 107 of Copyright Act 1976, allowance is made for FAIR USE for purposes such as criticism, comment, news reporting, teaching, scholarship, and research. Fair Use is a use permitted by copyright statute that might otherwise be infringing. Non-profit, educational or personal use tips the balance in favour of fair use. Thank you.2015-03-19T21:05:41.000Z

Coming into 2013-2014, Yarmolenko had played in 36 European games and had 6 goals and 5 assists. Those are respectable numbers, but not numbers fitting for the best player on a competitive Dynamo Kiev team. Coming into 2013-2014, Dynamo Kiev looked to qualify for the Europa League, after qualifying for the Champions League, either through winning the Ukrainian league or through the Champions League Qualification Round, for five consecutive seasons. Yarmolenko was the third leading scorer in the Ukrainian Super League in the previous season, so Dynamo Kiev looked to him to be their main offensive target.

In 2013-2014, Yarmolenko answered with five goals in the Europa League, as Dynamo Kiev advanced to the Round 32 where they lost to semi-finalists Valencia. Over the past two seasons, Yarmolenko has scored nine goals in 18 Europa League matches with his four goals in 2014-2015 tied for fourth in the contest. Dynamo Kiev has progressed to quarerfinals of this year’s competition, led by Yarmolenko’s goal in Liverpool against Everton on March 10th that spurred a 5-2 victory. He also has seven assists in the Europa League in this campaign.

His skills are not without controversy, though, as Yarmolenko was shown a red card in Dynamo Kiev’s first leg of their Round of 32 matchup with Guingamp, a 2-1 loss for Dynamo Kiev. Yarmolenko was supposed to be suspended for three games, as Dynamo Kiev won 3-1 in the second leg, but the suspension was overturned and he was able to play against Everton.

Yarmolenko was married in 2011 to wife Inna and they have a son, Ivan. He was born on May 22, 2013. His wife is a specialist in foreign affairs and a director of American charity fund.

Their son Ivan is also a soccer fan, but not particularly for his father’s team:

5. He Has Scored 91 Goals for Dynamo Kiev 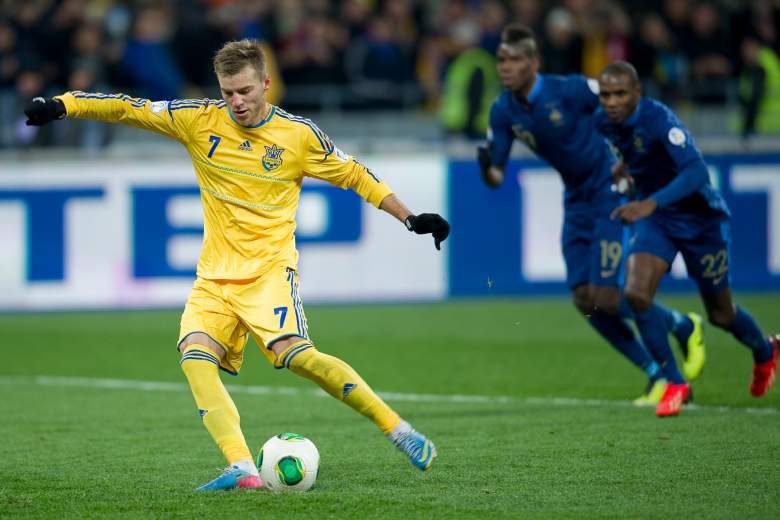 Andriy Yarmolenko has scored more than 10 goals in the Ukrainian league for five consecutive seasons. (Getty) 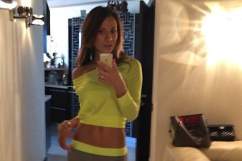 Read More
5 Fast Facts, Soccer
Midfielder Andriy Yarmolenko of Dynamo Kiev has been linked to a transfer with Liverpool from Dynamo Kiev.