The goal finished off a fine afternoon for the 24-year-old Belgian, who fired a hat trick in a crucial relegation matchup. Here is what the bottom of the table looks after tonight’s match.

Queens Park Rangers took a 3-2 lead just six minutes earlier on a goal from Charlie Austin, but Benteke had the final say.

Benteke had 19 Premier League goals in 34 matches in 2012-2013, but had fallen on tough times since. Prior to Tuesday, he had 16 goals in 48 appearances. Benteke has been capped 21 times for Belgium and was signed by Villa in 2012 from Belgian side Genk for about $10 million.

Benteke is a target of some of the top clubs in England, but it appears he’s staying put for now. 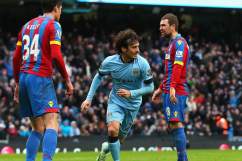 Read More
Soccer
Aston Villa forward Christian Benteke curls in a delightful free kick to save a point for his side against Queens Park Rangers. The match ended in a 3-3 draw.