Charlie Adam scored a goal from his own half of the field against Chelsea in the 45th minute of a game on April 4th, 2015 to level the game at 1-1. This is only Adam’s third goal of the season, but it has to be a candidate for goal of the year in the English Premier League.

Chelsea ended up winning the English Premier League matchup against Adam’s Stoke City side 2-1, but Adam’s goal will not be soon forgotten.

Chelsea head coach Jose Mourinho was not certain that the goal should have counted, but is pretty sure it is the best goal he has seen this season:

Jose Mourinho on Charlie Adam's Wonder goal v ChelseaJose Mourinho says Charlie Adam's wonder goal for Stoke City at Chelsea must be goal of the season HaytersTV brings you closer to the action, with unrivalled access to the biggest names and clubs in sport. Our extensive football coverage includes training ground footage, manager & player press conferences/interviews and live broadcasts from the biggest events. Keep across the channel during the World Cup for an extensive array of content from the world's biggest stars, with Russia playing host to Cristiano Ronaldo, Lionel Messi and Neymar amongst others. HaytersTV is littered with journalists who have vast knowledge in many different sports and we will bring extensive coverage from the world of boxing, tennis, rugby, cricket and much more. Be sure to subscribe. HaytersTV – sport we've got it covered. ——- FOLLOW 🔥HAYTERSTV🔥ON SOCIAL MEDIA 👍 FACEBOOK – https://bit.ly/2HKsLL8 TWITTER – https://bit.ly/2sZCj0j SUBSCRIBE on YOUTUBE – https://bit.ly/1T5QtVm2015-04-04T19:54:59Z

It is also not the first time that Charlie Adam scored a goal from his own half in competitive play:

Charlie Adam Scores Outstanding Goal From Halfway LineCharlie Adam scored a sensational halfway line goal against Chelsea, and it would appear the Blackpool legend had been practising. This goal came in a reserve game against Accrington Stanley in 2009. ► Subscribe: http://www.youtube.com/subscription_center?add_user=officialblackpoolfc2015-04-04T18:22:18Z

Charlie Adam gained acclaim from this goal for Blackpool against Manchester United in the 2011 season:

Blackpool only spent one season in the English Premier League and Adam’s free kick skills helped them get there:

Adam was looked to be a major addition for Liverpool, but was more known for a pivotal penalty kick miss:

Liverpool went on to win the Carling Cup, but he was sent to Stoke City.

Since moving to Stoke in 2012, Adam has become better known for moments like this with Arsenal star Alexis Sanchez: 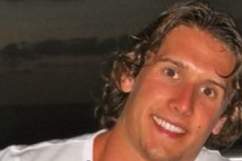 Read More
Soccer
Charlie Adam scored a goal from his own half of the field against Chelsea to level the game at 1-1. Even though Chelsea won the game 2-1, Adam's goal will not be soon forgotten.