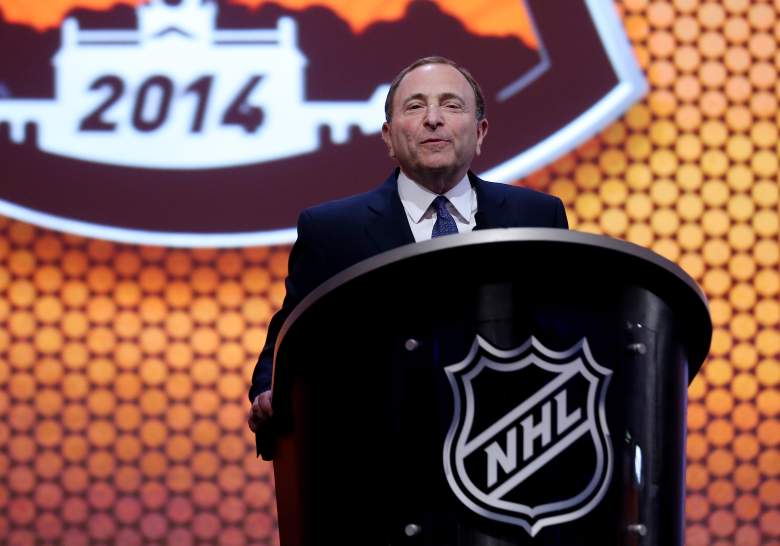 NHL Commissioner Gary Bettman speaks during the first round of the 2014 NHL Draft at the Wells Fargo Center in Philadelphia, Pennsylvania on June 27, 2014. (Getty)

The Chicago Blackhawks are the 2014-15 Stanley Cup Champions, but the nice thing about the NHL is the turnover from the postseason to the offseason is a short one.

The 2015 National Hockey League Entry Draft is almost here, and this year’s host will be the Florida Panthers — the team that made defenseman Aaron Ekblad the No. 1 overall selection in last year’s Draft held from the Wells Fargo Center in Philadelphia.

Here is all of the information you need to know before this year’s NHL Draft:

BB&T Center in Sunrise, Florida — home of the Florida Panthers

The Edmonton Oilers won their 4th NHL Lottery in the last six seasons, and own the Connor McDavid pick — this year’s No. 1 overall selection. The Buffalo Sabres own the No. 2 overall selection. The top two draft choices are expected to be McDavid and Boston College center Jack Eichel. The American forward helped the Terriers reach this year’s National Championship Game where they eventually lost to Providence.

From there, it’s anybody’s guess at how the rest of the Draft plays out. The Arizona Coyotes — who have been having financial issues recently with their home city of Glendale — will truly begin the Draft when they pick No. 3 on Friday night, and they’ll have some intriguing options on the board.

Keep it at Heavy during the week for updated information regarding the 2015 NHL Draft.