Late in the first half of the Dolphins’ preseason game with the Bears, LaRon Byrd made an outstanding catch to haul in a pass from reserve quarterback McLeod Bethel-Thompson. The catch led to a field goal by Caleb Sturgis that gave Miami a 10-3 halftime lead.

The former University of Miami player was undrafted in 2012, but was signed by the Arizona Cardinals. He appeared in four games in his rookie season, and was released prior to the 2014 season.

Byrd spent time with Cleveland and Dallas since before landing with the Dolphins for 2015.

Byrd has one career catch in the regular season. 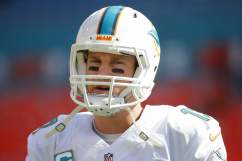 How to Watch Bears vs. Dolphins Live Stream Online