BYU upset Nebraska with this Hail Mary touchdown as time expired. The Cougars were down by one point with one second to go as the back-up quarterback threw this wild Hail Mary pass. Officials reviewed the play but confirmed that it was a touchdown

The Cougars jumped out to an early lead, but star quarterback Taysom Hill left the game early with an injury. Hill was 21-of-34 for 268 yards and one touchdown. He also had 72 rushing yards and two touchdowns on the ground.

Nebraska came back in the game and had the lead late in the fourth quarter. BYU backup quarterback Tanner Mangum led the team down to midfield. Mangum threw the ball up in the air and Mitch Matthews caught the ball right at the goal line for the touchdown. Mangum was 7-of-11 for 111 yards and one touchdown.

Mangum was part of the Elite 11 team with Jameis Winston and won MVP of the camp. Recently, Mangum returned from a two-year mission, a move that forced him to leave the BYU team. When interviewed after the game, Mangum said he had been preparing for this moment for the entire summer.

Unfortunately, BYU got word that Taysom Hill will miss the rest of the season. 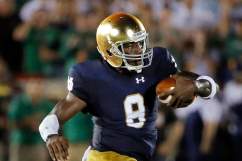