Jameis Winston Scores Touchdown With Under a Minute to Play

Winston followed that up the very next play with a touchdown to seal the win for the Buccaneers.

Jameis Winston flipped toward the end zone with just over a minute to play, losing the ball mid air. His fumble, which was recovered initially by Dallas, was called back after a penalty was called by Cowboys safety Jeff Heath. 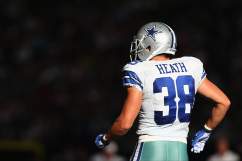