Jordon Ibe and Liverpool are trending in the right direction. (Getty)

Liverpool welcomes Crystal Palace to Anfield on Sunday, looking to stay undefeated in domestic play under new manager Jurgen Klopp. This won’t be the freshest Liverpool club we’ve seen, as the side endured 5,000 miles of travel for the midweek EUROPA league clash with Russian side Rubin Kazan. Now less than three full days later, the side is back home to face a Crystal Palace side winless in it’s last three contests.

Both of these sides are right on the cusp on European contention, and win Sunday would force the conversation about either of the teams cracking the top four. Crystal Palace is tenth, one spot below the Reds. But unlike Liverpool, Crystal Palace has struggled recently. Alan Pardew’s side hasn’t won in three EPL matches, when they blanked West Brom, 2-0. 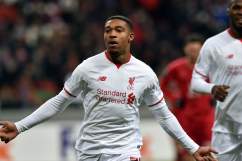 How to Watch Liverpool vs. Crystal Palace Live Stream Online