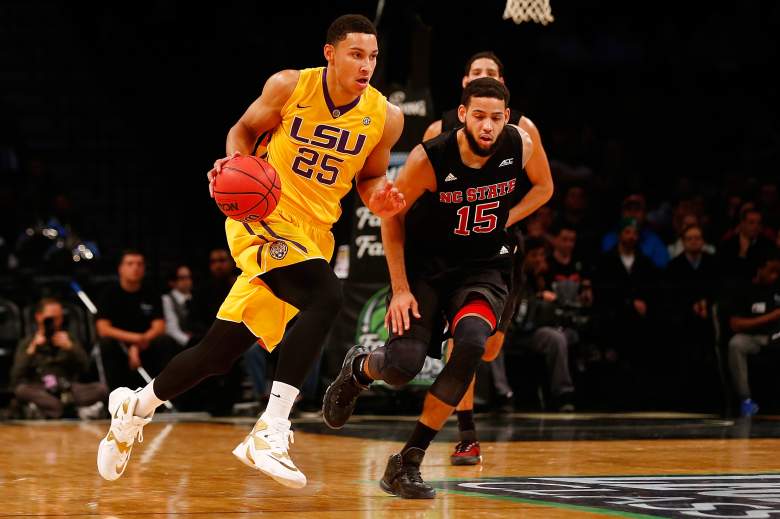 Ben Simmons is considered one of the top prospects in the NBA Draft. (Getty)

Depending on who you ask, LSU’s Ben Simmons or Duke’s Brandon Ingram will be selected with the first pick of the 2016 NBA Draft. With just over a month before the draft, it appears to be clear that it will be either Simmons or Ingram who will shake Adam Silver’s hand first.

At the beginning of the college basketball season, Simmons looked to be a unanimous choice as the top prospect in this year’s draft class. In recent months, Simmons has been criticized for a number of things. The critiques include LSU’s failure to make the NCAA Tournament, the way he finished the season and a lack of effort at times on Simmons part.

With Simmons under fire, it has opened the door for Ingram to be selected number one overall. According to Chad Ford, Ingram did well in Chicago during the Combine interviews with teams.

The preference on Simmons or Ingram depends on what the team is looking for. Simmons has more star power and looks to have more potential than Ingram. Ingram is seen as the safer selection with a higher floor than Simmons.

Simmons play has drawn comparisons to Lamar Odom. His court vision and the ability to create for his teammates is a big reason he is a top prospect.

Here’s a look at Simmons highlights and how he compares to past NBA players:

Ingram has the length and size that is appealing to NBA teams. He will need to get stronger as he transitions to the NBA. Ingram’s strengths include his ability to shoot, score and rebound.

Here’s a look at some highlights of Ingram:

Heavy has Simmons as the top pick in our latest mock draft. While it will depend on what the team selecting atop the draft wants, we think his superstar potential will be too much for a team to pass on.

Read More
Basketball, NBA, NBA Draft, NBA Draft 2016
Find out who is expected to be the top pick in the upcoming NBA Draft. We compare Ben Simmons and Brandon Ingram.