Fox 10 Phoenix is airing a live stream of Muhammad Ali’s funeral, which you can watch right here. They are covering his funeral and will start a live stream of the service as soon as the funeral begins.

Muhammad Ali’s funeral is scheduled to start at 3 p.m. Eastern in Louisville, Kentucky. (It was originally scheduled to start at 2.) The funeral will take place at the KFC YUM sports arena. Although it’s open to the public, only ticket holders will be able to attend. Free tickets were given away on Wednesday and were gone within an hour.

To learn more about how to watch the livestream through other means, such as mobile apps, please see our story below. 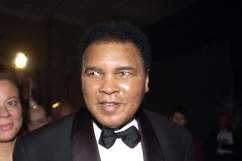