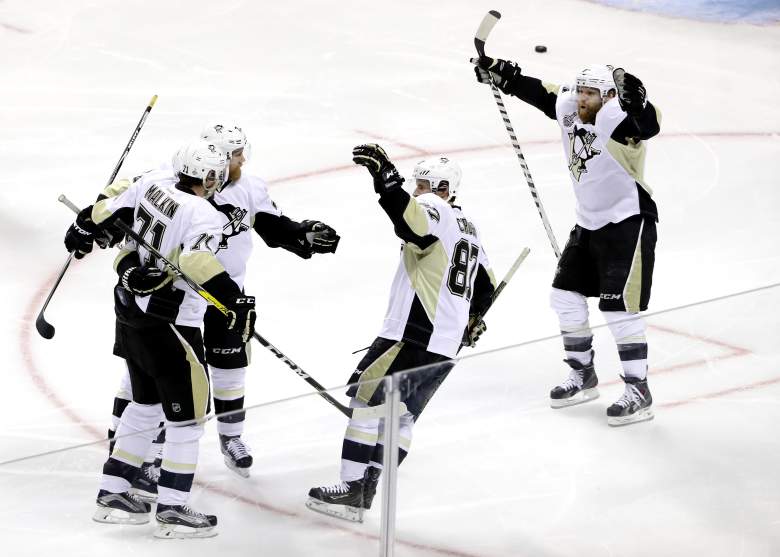 Penguins Evgeni Malkin celebrates with his teammates after scoring against the San Jose Sharks in the second period of Game Four of the Stanley Cup Final. (Getty)

The Pittsburgh Penguins head into Game 5 with an opportunity to win the Cup on home ice for the first time.

San Jose, meanwhile, is faced with a do-or-die scenario, and must win tonight’s game to keep their hopes alive.

The Pens have a dominant 3-1 lead in the best-of-seven series, and have outplayed the Sharks in the first four games.

Getting off to a fast start will be paramount for the Sharks in Game 5, something they have been unable to do in this Cup final.

The Sharks have never led during any game of this series, and their biggest stars — Joe Pavelski, Joe Thornton, Brent Burns and Logan Couture — have yet to score.

Another huge key for the Sharks is goalie Martin Jones, who will need to be at the top of his game.

Jones, who had a solid performance in the first three games, struggled in Game 4. He gave up three goals on 20 shots, finishing with an .850 save percentage.

The Penguins, once again, look to use their stifling speed to overcome the Sharks.

Phil Kessel has certainly done his part. He leads the team in goals and points, netting 10 goals over the last seven weeks. Kessel also has 11 assists, including setting up a pair of goals in Monday’s 3-1 win.

Matt Murray made 23 saves and was crucial in preserving the Penguins’ lead in the third period.