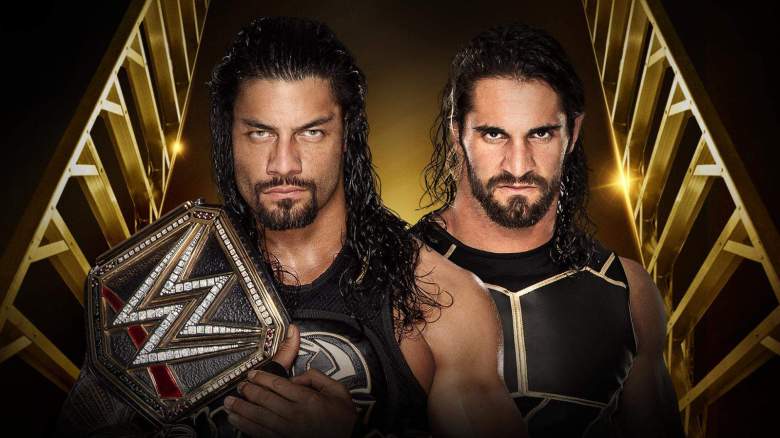 Seth Rollins defeated his rival Roman Reigns during Money in the Bank 2016. (WWE)

This year’s Money in the Bank was a wild one. A.J. Styles defeated John Cena, Dean Ambrose emerged victorious in an incredible ladder match, and Seth Rollins beat Roman Reigns…only for Ambrose to cash in and steal the championship belt for himself.

Not all of the 3 1/2 hours were as exciting, though; sandwiching a Rusev vs. Titus O’Neil match between the two main events, for instance, left many scratching their heads.

Needless to say, the Internet had a lot of opinions about the show. Here are some of the Twitter reactions to this year’s Money in the Bank you need to see.

If Golden Truth/Breezango feud intended to be a throwback to the days when you felt embarrassed to be a wrestling fan, WWE nailed it.

Nice of WWE to let one of the writer's kids handle the Breezango-Golden Truth feud.

Dudley Boyz vs Lucha Dragons in a super important match

Lucha Dragons vs Dudley's makes 0 sense. At least the other kickoff matches have story… This is just random. #MITB

Lucha Dragons are always fun to watch tbh, glad this is on the pre-show makes up for having to see The Golden Truth.

The Vaudevillains are wearing 1900s magician tops and they're not the most ridiculous dressed in the ring. #MITB

The Vaudevillains are so underappreciated on the main roster…#MITB

Luke Gallows hesitating to save his partner, can be storylined. I think timing botch helps story. Keeping it ?

GREAT effort from Baron Corbin and Dolph Ziggler … it's unfortunate Las Vegas did not receive it well. @HEELZiggler @BaronCorbinWWE #MITB

10 years from now, Ziggler/Corbin will be the new repetitiveness feud of Orton/Cena.#MITB

Chants of "BORING"…time to end this feud WWE. You certainly need to realize when it's OVERKILL #MITB

I have no desire to see Baron Corbin wrestle Dolph Ziggler ever again in my lifetime. Please move Corbin on, he's good. #MITB

You know people are sick of a feud when you fly into the ring at the last split second to avoid being counted out and people boo. #MITB

Well, that was a boring, meaningless match. #MITB #MoreBeltsPlease

Glad #wwe is finally giving the women real storylines like "one tag team partner turns on the other" and … uh … that's it really.

Whaaaaaaaat?! NATALYA heel turn?! I did not see that coming!!! #MITB

With Natalya heel turn….that just makes Sasha Banks the babyface of the women's division when she comes back #MITB

Natalya Heel turn? Random… hope this leads to a Becky Vs Nattie feud, leaving an opening for Charlotte Vs @SashaBanksWWE Title fued! #MITB

To be honest, I didn't see that coming. That heel turn was unexpected. So Natalya vs Becky at Battleground? She needs some explaining. #MITB

Match was whatever but the Natalya heel turn was certainly shocking/interesting. Hey, I'll take it! #MITB

Sheamus vs. @ApolloCrews is brought to you by "Hold on while I check & make sure I'm DVRing Game of Thrones" #MITB

Apollo Crews just got the Biggest Win of his Career in Sheamus' Biggest Loss during the Biggest #MITB in History Ever Ever.

Get it homie! @ApolloCrews #MITB

The Way AJ Styles reversed that AA was INCREDIBLE!#MITB

Looks like the story of the match is that Cena has lost a step, and is beginning to realize it.

Totally cool w/this. Styles wins but we haven't quite gotten an answer as to who's better. Keep that question looming overhead. #MITB

Right about now, you know AJ Styles isn't regretting his decision not to go back to TNA.

That was one of the sickest spots in ladder match history. Michinoku Driver onto the SIDE of the ladder

Hell of a ladder match #MITB

Very happy with the ending to the #MITB ladder match. It's about damn time! The main event just got much more interesting too…

I didn't think we had time for the Rusev match #MITB

Rusev has the best overall look and appeal to me from anyone on the roster. He just looks like a world champion. One day. #MITB

With all due respect to Rusev, he's no Sasha Banks when it comes to picking on kids in the audience. #MITB

Dominant, being mean to children Rusev is the Rusev I've always wanted. Feel like the character is finally on track. #MITB

I hope this Rusev / O'Neil feud goes on for months.

Roman and Seth both wearing gear that looks like they are in comic books. #MITB

Reigns is working a more heel style. No chance they could pull a double switch, is there?! #MITB #ReignsVsRollins

Are they going for a double-turn in this match? Reigns is showing off a lot of heel characteristics, and Rollins is being defiant. #MITB

He's not a good guy
He's not a bad guy
He's just the guy responsible for some of the most boring main events I've ever seen.#MITB

Wait, #MITB is still going on? Just have Ambrose cash in & end it. This isn't rocket science.

Seth Rollins is the WWE Champion. And the Internet rejoices. #MITB

The Lunatic Fringe is OUR WWE WORLD HEAVYWEIGHT CHAMPION #MITB

Dean is FINALLY champion?! Is this a dream!? #MITB pic.twitter.com/bpJUou3gbH

All 3 shield members were champs in one night. In the last five minutes! #MITB

This is kinda the coolest, no? #MITB

Im not the biggest Ambrose fan but in the moment they had me. bought the whole thing. Shield TripleThreat here we come. Great stuff! #MITB

That was a tremendous way to end the show. Extremely happy for Ambrose. Such an amazing job by Roman & Seth.

So upset Seth lost the title but so happy he beat Roman ??

Tomorrow should be interesting! #MITB