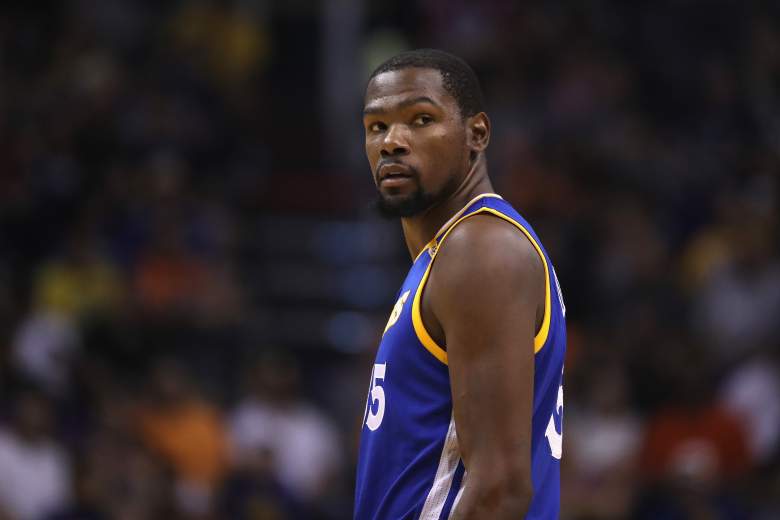 The highly anticipated meeting between the Oklahoma City Thunder and Golden State Warriors, the first time current Warrior Kevin Durant has played against his former team, lived up to the hype for about a quarter. But after a slow start Golden State got going, and a 22-3 run not only erased a ten-point Oklahoma City lead but served as the catalyst for what would finish as a 122-96 rout. Durant finished with a game-high 39 points, tying his career-high with seven made three pointers. Below are highlights and breakdowns of each quarter.

For those who are curious, there was no handshake between Westbrook and Durant prior to the opening tip. But to be fair, Westbrook generally doesn’t shake hands with anyone so that likely isn’t something to read too much into. As for the action on the floor, the Thunder got off to a hot start with Steven Adams scoring nine points as the visitors led by as much as ten early on. Golden State would get back into the game thanks in large part to Durant, who scored 13 points on 5-for-7 shooting from the field. Adams led OKC offensively with those nine points, with Westbrook adding seven points, five assists and three rebounds.

Below are some highlights from the first quarter.

Klay connects on a three ball for his first points of the game on @NBAonTNT! #NBARapidReplay https://t.co/AHBZ7oOCxe

Yo Jerami Grant JUST JOINED THE THUNDER AND HE OUT HERE TRYING TO CLAIM A BOUNTY ON DURANT TOO ?? https://t.co/0sf5xFpc2e

The second quarter is where things got away from the Thunder. With a 22-3 run that began during the latter stages of the first quarter, Golden State grabbed control of the game with Durant leading the way. Durant scored 16 more points in the second quarter, hitting shots from wherever he wanted while also blocking a couple shots on the other end. Westbrook did his best to keep the Thunder afloat, but the supporting cast wasn’t productive enough to endure the Warrior onslaught. Westbrook finished the half with 12 points, six assists and four rebounds, with Stephen Curry supplementing Durant’s 29 with 13 points and five assists and Draymond Green contributing seven points, eight rebounds and three assists.

Below are a couple highlights from the second quarter.

The closest thing to a greeting we'll get https://t.co/sr3Me6h7ib

Doesn't get better than this https://t.co/x2EJDjhQ9X

KD takes it to the rack! ? https://t.co/t0ZMhongxB

Things got even worse for the Thunder in the third quarter. Westbrook continued to struggle offensively with limited help outside of Victor Oladipo and Steven Adams, and Durant continued his offensive assault on the other end. Durant scored seven more points in the period to bring his total up to 36, with the final two coming on a one-handed dunk with four tenths of a second remaining in the third. Also of note for Golden State were the three-pointers hit by Klay Thompson, who entered the game 3-for-28 from three through four games. Getting him going seemed to be an objective for the Warriors in the third quarter, and Thompson making a couple shots should help him snap out of that early season funk.

Thompson has 12 points, with Curry on 21 to lead the way for the Warriors. Oladipo’s pacing the Thunder with 21 points, with Westbrook adding 20 and ten assists.

The rook Domantas Sabonis with a nice move on @NBAonTNT. #NBARapidReplay https://t.co/yht0qheBzo

Curry from the corner ? https://t.co/TkwV4Bm1JY

The Warriors closed things out in the fourth quarter, with Durant finishing with a game-high 39 points to go along with seven rebounds. Also scoring in double figures were Stephen Curry, who finished with 21 points, and Klay Thompson who added 18. Draymond Green fell one point short of a double-double with nine points, ten rebounds, five assists and four blocks. Victor Oladipo led four Thunder in double figures with 21 points and Westbrook added 20 and ten assists, but he shot 4-for-15 from the field and committed six turnovers. 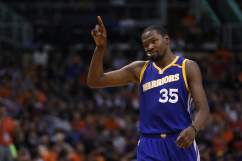 Thunder vs. Warriors Live Stream: How to Watch Online for Free