Over 98,000 were in attendance to see the final Clasico of 2016, and they were treated to another match that was tense until the final seconds. Sergio Ramos slammed home a header in the 90th minute to force a 1-1 draw at Camp Nou, keeping Real Madrid’s lead in the table to six points.

After a scoreless first half, Barcelona opened the scoring when Suarez headed home a free kick from Neymar. Barcelona knifed through Madrid’s defense for several looks on goal, but
Neymar and Messi both missed close-range opportunities. Barcelona controlled possession for the majority of the second half, but were unable to capitalize on any chances.

Madrid survived until the dying moments, and made the most of their chances. Marcelo continued to pour in accurate crosses in the final minute, and Ronaldo and Ramos both came up short on chances in the last ten minutes. Ramos got a second opportunity in the 90th, slamming home a free kick from Modric.

Both teams will regroup from this emotional clash for midweek Champions League action. Barcelona will host Monchengladbach on Tuesday, while Madrid host Borussia Dortmund on Wednesday,

Scroll down for full match highlights, including video of both goals:

Last-second drama for Madrid, as Carvajal heads the ball clear off the line with only seconds to play. Barcelona were inches away from the victory, but one hard-earned point will go to each team today.

Ramos gets a second chance from close range, and this time he blasts it past Ter Stegen for the late equalizer. Madrid are minutes away from snatching a point at Camp Nou.

Madrid haven't had many chances, but this was a good one from Ramos, put just over! #ElClasico pic.twitter.com/JghxYTlQCi

Sergio Ramos always seems to show up with a late header, but this time his effort was just over the goal. Madrid working hard in the final minutes.

.@andresiniesta8's had a big impact since coming on! #Messi will feel he should have buried this. #LaLiga #ElClasico https://t.co/HJL9bwdd67

Iniesta loops a pass between two defenders for a streaking Messi, but his far post shot slides wide. Barcelona’s passing has been excellent tonight, and the missed chances are piling up for Messi and Neymar.

Late developments. Suarez gets a yellow card, then Benzema is subbed off. The second half has been all Barcelona with less than 15 minutes remaining, but there’s plenty of time for Madrid to respond.

The return of @andresiniesta8 is welcomed by a huge applause from the home crowd! He replaces @ivanrakitic. #LaLiga #ElClasico pic.twitter.com/a7IFwCYEYw

Iniesta coming on for Rakitic.

Neymar bends a short free kick into the mix, and it’s a clinical finish for Luis Suarez. The Uruguayan heads it low and hard, past the diving Navas for the first goal.

That was first goal Madrid have conceded from a set-piece in Liga all season says @pedritonumeros . Neither Varane nor Kovacic too clever.

Iniesta out to warm up, drawing a loud cheer from the home fans.

Scoreless at the break but soap opera levels of drama crammed into the first 45. #beINElClasico https://t.co/V3MTwTPQ1l

Both sides have had chances, but we're scoreless at the break. STATS: https://t.co/VIIfvmp2RA #ElClasico pic.twitter.com/fnlPjdrQjD

Not much between these teams at the break, although both teams had legitiate penalty claims in the early minutes. It’s been a physical 45 minutes at Camp Nou, with both clubs coming very close to scoring. Madrid had more chances in the final 15 minutes, as they continued to hammer Barcelona’s right side. Ronaldo had two shots on goal in the final ten minutes, but was turned away both times.

Barcelona have been inches from breaking away a few times, only for a late Madrid block or deflection to stifle the movement.

Don’t expect this match to end 0-0. Goals are coming.

Ronaldo against Pique on the break, like of old… but this time Pique jockeys and Ronaldo doesnt try and beat him, shoots early, easy save

Ronaldo nutmegs Mascherano but ball just gets away from him and he cant get enough on shot / Alba does enough.

Ronaldo breaks free down the left wing, and blasts a near post shot at Ter Stegen. Ronaldo gets another chance seconds later, but that shot is also turned away. Madrid having more meaningful possession at the moment, especially down that left side with Marcelo and Ronaldo.

Cristiano Ronaldo tried to go for the bicycle kick but instead tangled with Benzema.

Ronaldo and Benzema are too close in the penalty area, and they collide instead of getting a chance on goal for Madrid. Madrid gaining steam before halftime.

29: Yellow card for Neymar for a challenge on Lucas Vázquez #FCBlive #ForçaBarça (0-0)

One for each team now.

No goals yet, but play definitely favoring Barcelona at the moment. Madrid has had some success down the left wing, but Barcelona have looked more dangerous in possession overall.

Benz with a terrible cross-field ball, forces Isco to commit a foul on Neymar that gets a yellow.

First card of the game, as Isco is shown a yellow for a professional tackle on the speedy Neymar.

Barcelona threaten, but a slip from Neymar slows the attack. He’s still able to loft the ball to Roberto, who whipped the ball into the defense and had a legitimate handball claim. Chances at both ends, and appeals for penalties at both ends here in the opening minutes.

Camp Nou. The speck of white top right are 200 Madrid fans in the 98,600 crowd. pic.twitter.com/bz3TsfMCvq

The teams pause together for a moment of silence dedicated to Chapecoense.

No Iniesta in the starting lineup for Barcelona. Messi is the Barca captain for the first time against Real Madrid, and Iniesta is on the bench as a substitute. No surprises from Zidane, with the exception of possibly leaving Casemiro on the bench in favor of Kovacic.

It’s the 232nd competitive meeting between Barcelona and Real Madrid, uniting soccer fans from all over the globe with a viewing audience of over 400 million. Messi and Ronaldo have had their bumps this year, but both are fit for what is still an important fixture in the Spanish title race.

When these teams met last year, Barcelona were on an unbeaten run and on their way to the La Liga crown. Even when Madrid defeated them 2-1 at Camp Nou, the Catalans were already well ahead in the table.

In their final meeting of 2016, the roles have been reversed. Real Madrid enter Saturday’s derby unbeaten in 21 straight matches across all competitions, and holding a six point lead over Barcelona in the table.

Barca have struggled in recent weeks, but should get a lift when Andres Iniesta returns for this match. Iniesta has spent the last five weeks sidelined with a knee injury, and Barcelona took just five points out of a possible nine in November’s league action.

The big name absent from this match will be Gareth Bale. The Wales star had successful ankle surgery last week, and his recovery time has been estimated at three months.

Keep this page refreshed after kickoff for match highlights and video of every goal. 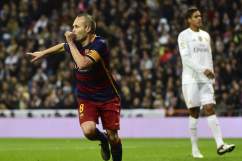 Get updates on El Clasico in Spanish at AhoraMismo.com: