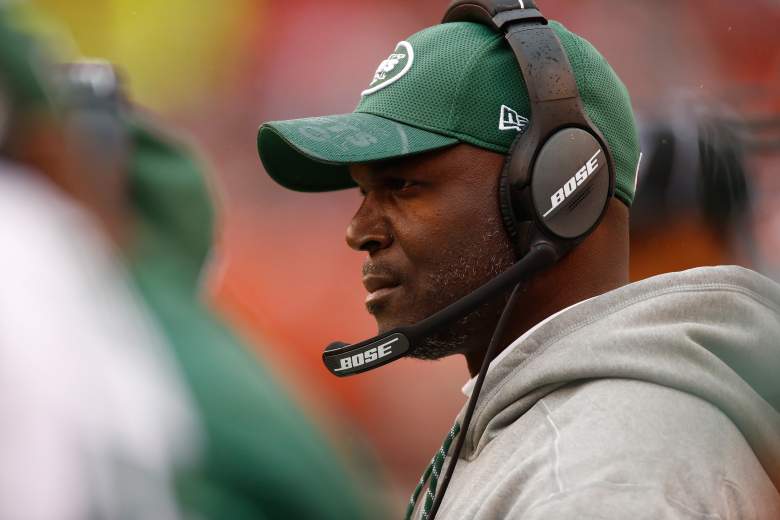 After just missing out on the playoff last season, Todd Bowles’ Jets are simply playing out the string in 2016 (Getty)

Looking for a live stream of the Jets-49ers game? Your options dependent on whether the game is in your local TV market and whether you’re a Verizon Wireless customer.

Kickoff is at 4:05 p.m. Eastern and will be broadcast on CBS. You can click here for a complete coverage map to find out if the game is being televised in your market. Read on for a rundown of streaming options:

If the Game Is in Your Market

If the game is on in your market, your only option to watch it on a computer, tablet or connected TV is via CBS All Access, a service that streams live CBS broadcasts in most U.S. markets. Streaming on smart phones is available only to Verizon customers through the NFL mobile app or Verizon’s go90 app.

Streaming of in-market Sunday games on smartphones is only available to Verizon wireless customers, who can watch for free via the NFL Mobile App or the go90 app. Both apps are free to download. You can download the go90 app here. You can also download the NFL mobile app in the following locations:

If the Game Is Not on in Your Market

If the game is not on in your market, the only options to watch are from DirecTV. If you’re a DirecTV subscriber with a package that includes the NFL Sunday Ticket, you can stream the game via the DirecTV website. NFL Sunday Ticket is included in the DirecTV Choice package (and every package above that), and you can click here to sign up.

If you don’t have a DirecTV subscription, you may be eligible for SundayTicket.TV, an online streaming service that costs $49.99 per month and allows you to watch out-of-market games without a cable subscription. SundayTicket.TV is available for people who live in residences that can’t get satellite (apartments, condos, etc.), as well as residents of San Francisco, Philadelphia and New York City. You can click here to see if you’re eligible.

Finally, most college students may watch out-of-market games via SundayTicket.TV U for $24.99 per month. You can click here to sign up.

If you have any of the above Sunday Ticket packages, you can watch out of market games on tablet and other streaming devices via the NFL Sunday Ticket app, which is free to download in the following locations:

If you can’t watch the game live, you can watch NFL RedZone — which jumps around from game to game during the key moments of Sunday’s action — via Sling TV, an online streaming service that provides access to select channels for a monthly fee. Sling is offering a free preview of NFL RedZone when you order the Blue package.

4) Select the channel package or packages you want. Make sure to include Sling Blue AND the Sports Extra package, which includes the NFL RedZone channel

5) Enter your payment information. Sling Blue costs $25 per month, while the Sports Extra package is $5 per month, but if you cancel your subscription within seven days of signing up, you will not be charged

If you’re fine watching the game on demand, another option is NFL Game Pass Domestic, which allows you to watch replays of games for a fee of $99.99 for the season. No live games are available under this service, and the archive of each game is available each Sunday after the conclusion of all afternoon games.