Prior to the Atlanta Falcons and the Green Bay Packers taking the field to play each other for a chance to play in the Super Bowl, saxophonist Mike Phillips will take the field to rouse the Georgia Dome crowd with yet another rendition of the “Star Spangled Banner.”

Phillips played the anthem last week in an NFC Divisional Round victory against the Seattle Seahawks. His performance received praise on social media, and Phillips announced via Twitter that he would return to play the song once again in the NFC Championship game.

Thank you @AtlantaFalcons..I will be back in ATLANTA playing for the NFC Championship Game. Spread the word!!!! #saxthem2

It will be the last time the anthem is played in the stadium, as Mercedes-Benz Stadium will open next season.

Phillips is from New York and told NBC Atlanta that he first got into music when he was 10.

I was 10 years old, in the second grade in the Mount Vernon school system. A guy came in from the school and was recruiting for the band. My hand immediately went up. I guess I just didn’t feel like doing the work in front of me, but I had no idea it would become a profession. Unfortunately, music isn’t as predominant in today’s school systems as it was then.

The sax wasn’t the only instrument Phillips got into, as he also spent time playing the violin, bass and many others. He told NBC Atlanta that the saxophone “is the closest instrument there is to the human voice.

Kickoff is scheduled for 3 p.m. Eastern and the game will be televised on FOX.

Phillips has been playing the instrument professionally since he was 16 and has traveled across the world to share his talent. He has played the anthem in front of other large sports crowds before, including the NBA Finals. 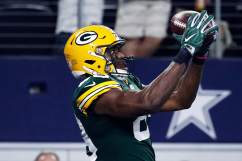 Falcons vs. Packers NFC Championship Live Stream: How to Watch Online for Free