Odell Beckham was banging head against locker room door, per Sal Pal. Also believed to have punched this hole in pic.twitter.com/dOpRJyremD

According to ESPN’s Sal Paolantonio, OBJ returned to the visitor’s locker room at Lambeau Field after the loss and “banged his head against the locker room door.” He was also believed to have punched a hole in the door.

The NY Daily News reported that nobody saw him commit the act, but a groundskeeper at Lambeau said that OBJ “heard the wall being punched and immediately came out into the hallway, where only Beckham was standing in front of the hole in the Sheetrock.”

Once Packers employee Greg Woulf saw what happened and confronted OBJ, the NY Daily News reported that Woulf responded “angrily,” to which OBJ allegedly said “f***k off” before heading back inside the locker room. Beckham Jr. appeared calm and level-headed in the game’s post-game press conference.

WATCH: @OBJ_3 on missed opportunities vs. the Packers pic.twitter.com/c5QUWpL1G1

Beckham was drafted in 2014 out of LSU by the Giants. He has become a prominent figure on New York’s offense since then, catching 288 passes for 4,122 yards and 47 touchdowns in those three seasons. Earlier this season, he became the fastest player in history to reach 200 receptions by doing so in only 30 games.

However, Beckham Jr. has become known for having tirades on the sideline and venting his frustration publicly and behind the scenes.

The NY Daily News reported that earlier this season, he was “spotted banging his head against a metal sliding door three times after a loss to Philadelphia this season. He reportedly had to be escorted to the visitors’ locker room by Giants co-owner John Mara and other staff members from the organization.

In September 2016, OBJ was angry on the sideline when squaring off against the Washington Redskins and took his frustration out on a kicking net, which sprung back and struck him in the head.

In 2015, Beckham Jr. and then Carolina Panthers CB Josh Norman got into an altercation during a game. OBJ threw punches at Norman on the field and was flagged three times in the game for personal foul penalties. 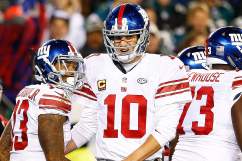