The stylin’ and profilin’ WWE Legend Ric Flair still has a lot left in the tank. The 67-year-old wrestling legend proved it when he posted a video to Twitter on Wednesday of him deadlifting 400 pounds at a gym.

The shocking video of Flair lifting the 400 pounds impressed many former wrestlers on social media:

Flair has a legacy in professional wrestling that few, if any, have been able to replicated. It spans well over 40 years, making stops in the NWA, WCW, and TNA in addition to the numerous years he spent in the WWE. He’s one of the most famous wrestlers in professional wrestling history, holding the WWE World Championship 16 times with numerous other title reigns in various promotions.

The wrestler, who’s known for his signature Figure-Four Leg Lock, emotionally retired from competing in the ring in December 2012. While he hasn’t laced his wrestling boots up since then, Flair has been a frequent figure on WWE TV.

Flair’s daughter, known as Charlotte Flair on WWE TV, has taken in her father’s footsteps in dominating opponents inside of the squared circle.

Charlotte’s stardom has led to the Nature Boy returning to the ring to play the on-air role of her father, who she feels she needs to live up to throughout her career.

Ric has four children, including Reid Flair, who was an up-and-coming wrestler himself before he died of heroin overdose in 2013.

Ric is currently single, but has had four spouses since 1971. 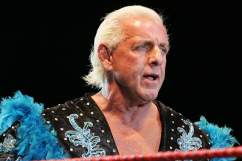