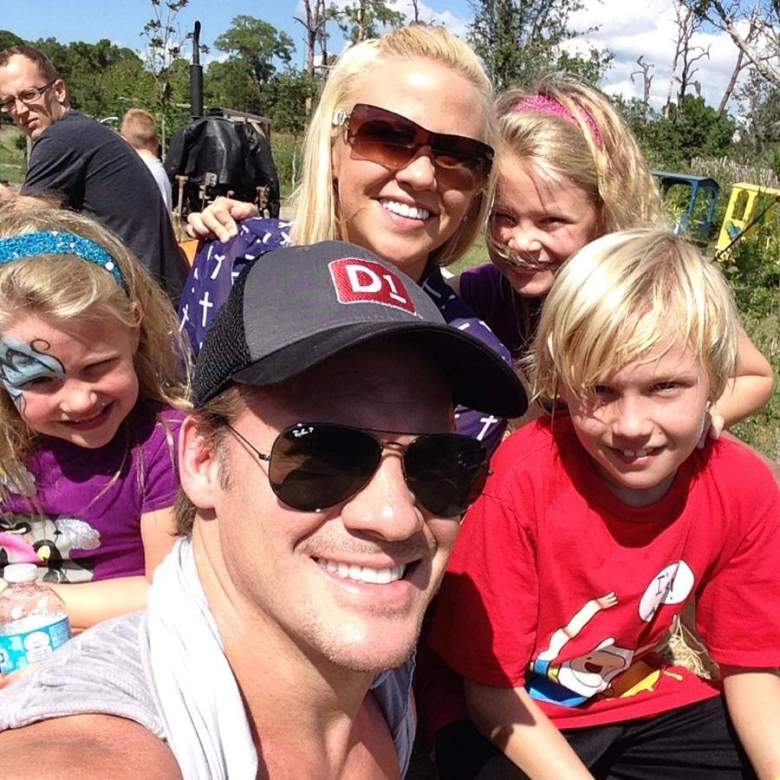 Chris Jericho, one of the greatest WWE superstars of all time, will be facing Kevin Owens at WrestleMania 33.

This comes after a months-long storyline in which Chris Jericho and Kevin Owens were best friends, only for Owens to betray Jericho on Monday Night Raw. Jericho is the current United States Champion, and that title will be on the line at WrestleMania.

Jericho has been married for 17 years, and he has three children. Here’s what you need to know about his wife, Jessica Lockhart.

Chris Jericho and his wife met at a Japanese restaurant. (Facebook/Jessica Lockhart Irvine)

Chris Jericho has Glenn Gilbertti, a.k.a. Disco Inferno, to thank for meeting his wife Jessica Lockhart.

Jericho explains in his book A Lion’s Tale that he met his wife in Tampa, Florida, where he was performing with World Championship Wrestling. He and his fellow wrestlers frequently went to a Japanese restaurant in Tampa after shows, and one night, Jericho noticed his coworker, Disco Inferno, talking to “a breathtakingly beautiful blonde.” As Jericho was staring at her, she glanced over at him.

“When our eyes locked, I was completely enchanted,” he writes.

Jericho asked Disco Inferno who the woman was, and he said that she was a friend of his.

“When I heard the magic word ‘friend,’ the race was on and I insisted that he introduce us,” Jericho writes. He did and we didn’t stop talking until the restaurant closed hours later.”

Jericho says that they exchanged numbers and by the time he got home that night, she had already left a message on his answering machine.

2. After They Met, They Spoke Over the Phone for Several Weeks

Chris Jericho met his wife Jessica when they were going to high school together in Canada. (Facebook/Jessica Lockhart Irvine)

After Chris Jericho and Jessica Lockhart met at that Japanese restaurant, it was quite some time before they saw each other again.

After all, Jericho was constantly on the road performing with World Championship Wrestling. Also, as Jericho explains in his book A Lion’s Tale, the very next day after they met, Jessica went up to her father’s cabin in northern Minnesota for three weeks.

However, Chris and Jessica spoke over the phone every day for the next few weeks.

“[T]he daily conversations helped us build a strong foundation for our relationship,” Jericho writes in his book. “We got to know each other well before anything physical happened. It was the exact opposite of the way most relationships begin and showed us that we had something special.”

Jericho says that by the time Jessica returned home from Minnesota, “she was already my girlfriend even though I’d kind of forgotten what she looked like. When I saw her again, she was more beautiful than I remembered and we’ve been together ever since.”

Jessica Lockhart and Chris Jericho were married in 2000.

In A Lion’s Tale, Chris Jericho talks about a Japanese fan named Masa who “was the most dedicated wrestling fan I’ve ever met, so much so that he learned English so that he could speak to wrestlers.”

Jericho says that Masa introduced himself when Jericho was in Japan with WCW, and he offered to help him with anything he needed.

“I took him up on his offer and we became good friends – he even attended my wedding,” Jericho says.

Chris Jericho’s best man at the wedding was Lenny St. Claire, a Canadian professional wrestler who performs under the ring name Dr. Luther, according to Jericho’s book The Best in the World: At What I Have No Idea.

4. She Wasn’t There to Witness Him Win the Undisputed Championship Because He Wasn’t Sure He Would Really Win

As Jericho explains in his book The Best in the World: At What I Have No Idea, it is tradition for wrestlers to invite their families to come see shows where they are to win a championship belt.

However, in 2001, when Chris Jericho became the first ever Undisputed WWF Champion, his wife Jessica was not there. That’s because Jericho wasn’t sure until the day of the show that he was going to win.

“I wasn’t told for sure until the day of the show that I was going over…so I didn’t have the chance to fly Jessica or my dad in to witness it,” he writes.

5. They Have Three Children

Their youngest is Ash Edward Irvine, their son who was born in 2003. They also have two twin daughters, SiSi and Chey, who were born in 2006. Anyone who listens to Jericho’s podcast Talk is Jericho will know them well, as Jericho’s three kids have all appeared on the show.

Ash is a self-described fish expert, and that’s usually what he talks about on Talk is Jericho; he has appeared on the show several times for Shark Week. Ash says that when he grows up he wants to be a ichthyologist, a person who studies fish and sharks.

Jericho’s daughters SiSi and Chey have a YouTube channel called Sisi & Chey Vlogs and Videos. Their subscriber count shot up after they appeared on Talk is Jericho and plugged the YouTube channel.