The bracket is set and teams are ready to tip-off for the start of the Mountain West Tournament. The tournament takes place March 8-11 in Las Vegas. Nevada enters as the top seed followed by Colorado State.

Nevada finished first in the Mountain West during the regular season and closed with a 14-4 conference record and a six-game win streak. Colorado State took second in conference followed closely behind by Boise State.

Nevada is projected to make the NCAA Tournament, however Colorado State sits on the outside looking in, so the tournament means a lot to the Rams.

Here’s a list of the final tournament seeds, along with the full bracket and schedule:

The action begins Wednesday, March 9 with three games and the quarterfinals taking place Thursday. The champion of the tournament will be decided Saturday, March 11. 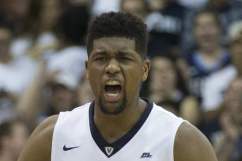