Here’s the details for the first round of the 2017 NFL Draft.

Draft Preview: The 2017 NFL Draft looks to be as unpredictable as ever with so much volatility at the top of the draft. Myles Garrett and Mitchell Trubisky are the two players being mentioned for the top pick. ESPN and NFL Network will be offering simultaneous broadcasts of the draft.

Trey Wingo takes over the reigns as the ESPN host for a retired Chris Berman. According to Sports Illustrated, Wingo will be joined on set by Mel Kiper Jr., Jon Gruden and Louis Riddick. Rich Eisen will quarterback the NFL Network broadcast with Mike Mayock, Daniel Jeremiah and Stanford coach David Shaw.

Cornerback, tight end and running back are three of the strongest positions in this draft class. All eyes will be on the quarterbacks as Deshaun Watson, DeShone Kizer and Patrick Mahomes are all being mentioned with Trubisky as quarterbacks who could be selected in the first round. Leonard Fournette, Christian McCaffrey, and Dalvin Cook are the consensus top three running backs in this class and all three have a chance to hear their name called Thursday night. 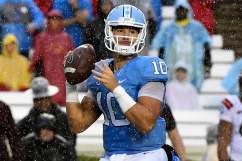 Read More
Football, NFL, NFL Draft
The first round of the NFL Draft kicks off tonight. Find out when the draft starts and the tv channels covering the marquee event.