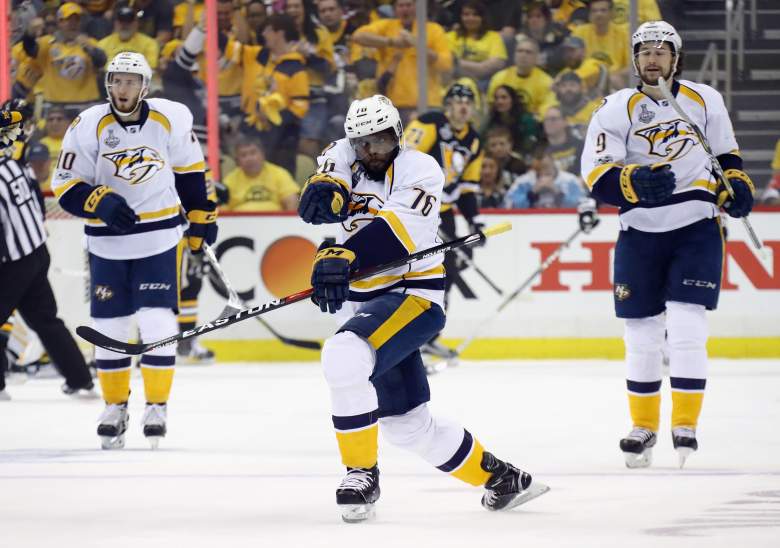 Can P.K. Subban (center) and the Nashville Predators rebound tonight from a tough defeat in Game 1? (Getty)

Well, it was a wacky start to the Stanley Cup Finals to say the least.

Coming off a 5-3 Game 1 victory in which they totaled just 12 shots on goal, the Pittsburgh Penguins will look to tighten up their play and contain a feisty Nashville Predators team, who thoroughly outplayed them on Monday.

After barreling ahead 3-0 in the first period — with one of those goals deflecting in on Predators defenseman Mattias Ekholm — the Penguins went an entire 37 minutes without a shot on goal. In that stretch, the Predators were able to knot things up and looked on the verge of forcing overtime.

That was until Jake Guentzel went shortside past Predators goaltender Pekka Rinne with 3:17 to go in regulation, giving the Penguins a lead they would not relinquish. Nick Bonino would add an empty net tally a little over two minutes later to seal the deal.

Guentzel's late goal lifts Pens past Preds in Game 1Penguins' Jake Guentzel scores a late goal to propel Pittsburgh past the Nashville Predators for a 1-0 series lead in the Stanley Cup Final2017-05-30T17:08:07.000Z

So where do both teams go from here? Let’s take a look at the odds, puckline, and over/under for Game 2:

What the numbers tell us is that Vegas likes the Penguins to forge ahead 2-0 in the best-of-seven series but probably not by more than two goals.

It should be noted that the return on taking Pittsburgh by more than two goals (+210) is a bit higher than it was in Game 1 (+195). That could be an indication Vegas recognizes the Predators were the better team in Game 1 but things just didn’t bounce their way. That’s hockey.

The odds also probably factor in that it’s highly unlikely Rinne plays at the poor level he did on Monday, giving up four goals on 11 shots. Prior to that performance, Rinne led the NHL in goals against average for the postseason.

But it’s hard to fathom the defending Stanley Cup champion Penguins giving another lackluster effort at PPG Paints Arena. Being outshot 26-12 is brutal and this team is just too deep and too experienced to allow Nashville to take it to them again on their home ice.

Ten of the 12 Pittsburgh forwards expected to be dressed for Game 2 were on last year’s Stanley Cup winning team.

As for the Predators, only center Mike Fisher had appeared in a Stanley Cup Finals game prior to this series.

So, let’s go with the Penguins again here in Game 2 and take the UNDER on the goal total. Rinne is too good to get torched like he did in Game 1, but we expect Pittsburgh to play at a much higher level — especially knowing they got away with one on Monday. 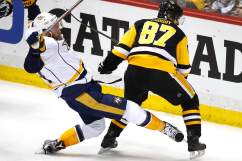 Read More
NHL, Odds, Stanley Cup
The Pittsburgh Penguins can go ahead 2-0 in the Stanley Cup Finals with a victory tonight over the Nashville Predators. Heavy has the odds, puckline and a prediction.