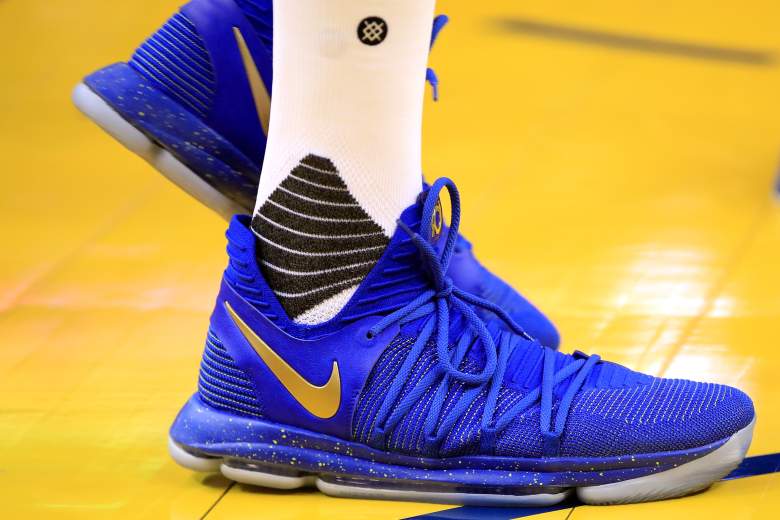 Kevin Durant’s shoes during Game 1 of the NBA Finals. (Getty)

Nike has never been one to back down from an experiment, and the 2017 NBA Finals are no different. The shoe company is giving fans an interesting opportunity to buy the NBA Finals edition of the KD 10’s “Still KD” shoes.

Here is where it gets interesting. Fans can only purchase the shoes tonight once the NBA Finals tip off through the Nike SNKRS app which you can download here.

It gets more complicated from there. Fans can only purchase the kicks when Durant is actually on the court. According to ESPN’s Darren Rovell, Nike will halt sales of the shoes on the app when Durant is on the bench, during halftime and timeouts.

The shoe sale will end once they have sold out or at the conclusion of the game, whichever comes first. The app lists the shoe price at $125 while ESPN notes there is a $150 version that comes with a special pin set.

Those who cop will receive a pin set that represents what “Still KD” means as well as a chance at 1 of 10 exclusive signed boxes pic.twitter.com/KAzgpF8jHO

Bleacher Report noted Durant will be wearing these blue and gold colorways during Game 1.

The Nike Zoom KD 10 PE to be worn by @KDTrey5 in Game 1 of the #NBAFinals pic.twitter.com/lU5RlEXxHL

While Nike might be attempting to increase demand for Durant’s special edition shoes, the company is also smart enough to not limit the sales of the shoes to one night. Nike will officially release the shoes on Friday, June 2, and it will not matter if Durant is on the basketball court or not.

Durant spoke about the tenth edition of his signature shoes in Nike’s launch video.

“Looking at each milestone and appreciating it for what it is. Celebrating the small, tiny victories. To go on this evolution with Nike, to be on my tenth shoe is just something I dreamed about. Ten years of anything is pretty huge,” Durant said in the video.

Here’s more details on the new shoe along with the different colorways.

You feeling the Oreo vibes on the upcoming Nike KD 10 colorway? pic.twitter.com/XEwT09gY7S

The KD10 is releasing in 'University Red' this upcoming September pic.twitter.com/RSpBUellHr

Read More
Basketball, Kevin Durant, NBA, NBA Finals 2017
Nike is giving fans a unique way to buy Kevin Durant's shoes during the start of the NBA Finals. Check out all the details on the new KD 10's "Still KD" kicks.