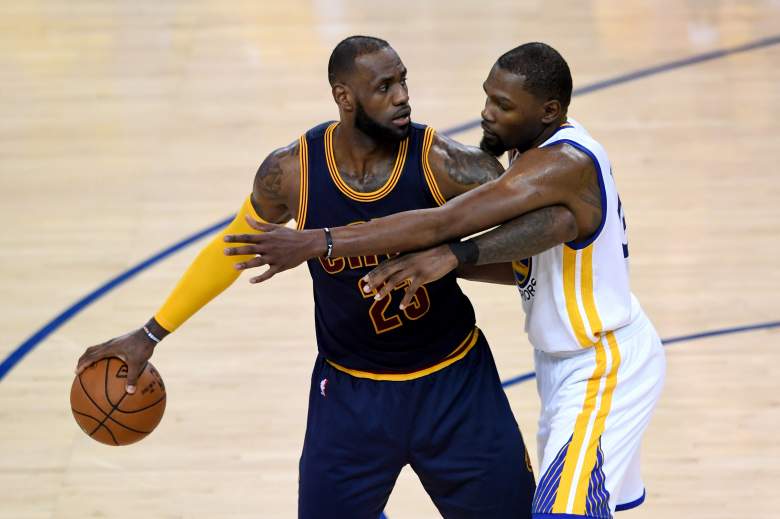 LeBron James and Kevin Durant is the matchup of the 2017 NBA Finals. (Getty)

In an era of position-less basketball, specific player matchups have become increasingly rare. The 2017 NBA Finals have offered an exception with LeBron James and Kevin Durant squaring off at the forward position.

As The Ringer’s Bill Simmons recently noted, the finals feature arguably two of the top four forwards in NBA history. When comparing careers, James is the obvious leader in the clubhouse. He is making his seventh straight NBA finals appearance while Durant is making just his second appearance in the championship series.

At 6’8″ and 250 pounds, James is a physical freak who is built like a linebacker but has the speed to play point guard. Durant has bulked up since he entered the league. The NBA lists Durant at 6’9″ and 240 pounds, but KD has a slimmer frame than James.

James is four years older than Durant and has also been in the league for four more years. James is playing in his 13th season while Durant is approaching double-digits in his ninth NBA season.

Over his career, Durant has averaged 27.2 points, 7.2 rebounds and 3.8 assists. James has quite similar numbers with the exception of more assists with career averages of 27.1 points, 7.3 rebounds and seven assists. James often has the ball in his hands in a point forward type role while Durant plays off-ball the majority of the time.

Heading into the 2017 finals, James has three championship rings while Durant is going for his first title. The two also squared off in the 2012 Finals but on different teams. James was playing for the Heat while Durant was still in Oklahoma City. Durant spoke with NBA.com about the evolution of their careers since their first finals matchup.

“Our games have grown. He’s been in the Finals every year since then, and I’ve played a lot of games since then. So, I just tried to use that experience to help me out today, and I’m sure he did the same,” Durant told NBA.com.

Durant has a real chance to win his first championship with a much stronger team than his 2012 Thunder. While the team had three players that would turn into superstars, Russell Westbrook and James Harden have evolved to become even better players since that series.

While Durant and the Warriors are the favorites in the finals, Durant’s chances of chasing James’ career are daunting but it does not take away from the historic 2017 matchup feature two of the best forwards in NBA history.

Here’s a look at highlights from the 2012 finals:

Read More
Basketball, Kevin Durant, LeBron James, NBA
Kevin Durant and LeBron James are two of the best forwards in NBA history. Learn more about how their stats compare over their careers.