Are you ready for round two?

One day after Conor McGregor and Floyd Mayweather Jr. shared a stage to promote their August 26 boxing match, the two will be at it again. On Tuesday, it was in Los Angeles. Today, it’s in Toronto.

The press conference is slated to begin at 5:30 p.m. EDT and will be live streamed by Showtime Sports in the YouTube video at the top of the page.

If Tuesday’s inaugural press stop on their four day, four city — and three country — tour was any indication, prepare for fireworks.

On Tuesday at Staples Center in Los Angeles, McGregor stepped to the podium first and took an immediate jab at Mayweather.

“He’s in a f***ing tracksuit, he can’t even afford a suit anymore,” McGregor said, making reference to a report that Mayweather still owes $22.2 million to the IRS.

McGregor was wearing a custom pinstripe suit. From afar, you couldn’t notice it, but close-up photos of the suit show the pinstripes had the phrase “f*** you” written in a straight line over and over.

“August 26? I’m about to knock this b**** out,” Mayweather said during his turn on the microphone. After that, he held up a $100 million check that he hadn’t yet cashed. Of course, McGregor responded with a witty line, saying “that’s for the taxman.”

The two followed that up with even more trash talking before heading to the front of the stage for some face-to-face posing in front of cameras.

After the two have the press conference at the Budweiser Stage in Toronto, they’ll be headed back to American soil and to Barclays Center in Brooklyn for their third press conference in as many days. Following that, they will wrap up the press tour with the final stop on their press tour Friday from The SSE Arena in London. 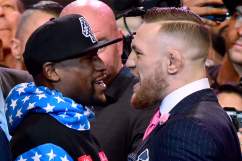