The United States is headed to the next round of the Gold Cup.

With Panama defeating Martinique, the United States already qualified for the knockout stages of the Gold Cup prior to taking the field against Nicaragua. The U.S. will take on El Salvador on Wednesday, July 19 at 9 p.m. Eastern on FS1.

Heading into the final day of group play, Panama and the United States were tied in goals. With Panama unleashing three goals on Martinique, the United States faced an uphill battle to try to win the group. Even if the U.S. defeated Nicaragua, they still had to top Panama’s goal production to come out on top.

Their three goals helped the United States win Group B based on the goal tiebreaker. This means they play on July 19 at 9 p.m. Eastern. This match in Philadelphia will be against the third place team from either Group A or C.

After Panama’s performance, it looked like the U.S. would draw Costa Rica. It would have been a rematch of a November 16, 2016 World Cup qualifying game. Costa Rica dominated the U.S. with a 4-0 victory. Joel Campbell scored the final two goals to seal the victory for Costa Rica.

Less than a week later, Jurgen Klinsmann was fired as USMNT manager.

Now, the United States will have to wait to see the results of Sunday’s matches to find out their opponent. They will face one of the third place teams from either Group A or C.

All this leads to an exciting final day as the quarter-final matchups are set Sunday night. 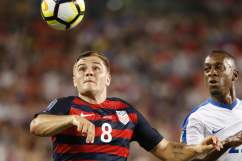