Floyd Mayweather Sr. is the man credited with teaching his son, Floyd Mayweather Jr., the defensive skills that have led him to a 49-0 record and made him a a five-division world champion.

Mayweather, 64, was born in Amory Mississippi and professionally boxed for 16 years, before becoming one of the most well-respected trainers in the industry.

Celebrity Net Worth says Mayweather has a net worth of around $10 million.

Here’s what you need to know about Mayweather Sr.:

Mayweather was a two-time Michigan Golden Gloves Champion. Mayweather competed as a professional boxer from 1974 to 1990. He fought as a welterweight and was known for his defensive abilities and overall knowledge of boxing strategy. He finished his career with a 28-8-1 record with 17 of his wins by KO.

In 1978, Mayweather took on the great Sugar Ray Leonard. Much of the fight was dominated by the 22-year-old Leonard, but Mayweather showed that he could take a beating. Mayweather lost in the 10th-round via TKO. Mayweather would later claim that he only had two-weeks notice to prepare for Leonard, and that he fought the fight with a broken hand.

“I fractured my hand in the fight against McKnight in the 8th round,” said Mayweather. “I don’t want to take anything away from Leonard. I respect everything he accomplished in the game. But, I know if my hand was okay I could have beat him.”

Mayweather had one title fight in his professional boxing career. He fought for the welterweight title against Marlon Starling in 1985. The fight went the distance, but Mayweather lost via unanimous decision.

2. Mayweather Is an Accomplished Trainer

GettyBoxer Ricky Hatton, (R) of Great Britain works out at a gym with his trainer Floyd Mayweather Sr. on April 16, 2009 in Las Vegas, Nevada.

After his boxing career, Mayweather became one of the most accomplished boxing trainers of his time. In addition to training his son, Mayweather is the former trainer of Ricky Hatton, top light heavyweight Chad Dawson, former two-division champion Joan Guzman, and women’s champion Layla Ali.

Mayweather trained Mayweather Jr. until 2000 when he was fired as trainer. Jr. said that his father was putting to much pressure on him to be perfect, which led to the confrontation. Mayweather Sr. was replaced by his brother Roger. Sr. would briefly train Jr. in 2006 when Roger was serving six months in jail, but was let go when Roger was released.

In 2013, Floyd Jr. announced that Floyd Sr. would return as his trainer against Robert Guerrero. Mayweather Sr. has remained his trainer ever since and trained him in his victory over Manny Pacquiao.

According to Bleacher Report, business had gone badly between the two men and Floyd Sr. roughed Sinclair up a bit at a local roller rink. When Mayweather returned home that night, Sinclair was waiting for him with a 20-gauge shotgun. Floyd Sr. used young Jr. as a human shield, in hopes that Sinclair wouldn’t shoot. Floyd Sr. related the story to the Los Angeles Times.

“If you’re going to kill me, you’re going to kill the baby too,” said Mayweather to Sinclair. “[Floyd Jr.’s] mother said, ‘Give me the baby.’ She was pulling the baby out of my arms so her brother could shoot me. But, I wasn’t going to put that baby down. I didn’t want to die. It wasn’t about putting my son in the line of fire. I knew [Sinclair] wouldn’t shoot the baby. So he took the gun off my face, lowered it to my leg and bam!”

The buckshot destroyed Floyd Sr.’s leg, talking off much of his left calf. The injury drastically altered his boxing career, limiting his movement and forcing a complete alteration of his carefully honed tactics, according to Bleacher Report.

In 1993, Mayweather was sentenced to five years in prison for Drug Trafficking. He and some colleagues were convicted of smuggling cocaine into the United States in detergent boxes, according to Complex. It was after his release from prison that he began training Floyd Jr., according to TheSportster. Mayweather Jr. won his first title, the super featherweight championship, just months after his release.

In a 2015 interview (available above), Mayweather said that he went to jail for his son.

5. Mayweather Said He Wouldn’t Know If He Is Cornering The McGregor Fight Till Day Of

Mayweather told Ariel Helwani on a special edition of The MMA Hour on Friday morning that he is unsure if he will be one of his son’s cornermen for the McGregor fight.

He said he won’t know until Saturday – the day of the bout – whether or not he will be in the corner. He did say that he wanted to be. 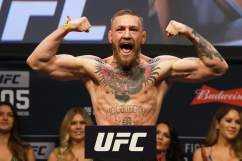