Ric Flair, whose real name is Richard Morgan Fliehr, is in the hospital, according to TMZ. His family has asked for prayers and the site reports that things sound serious. The former professional wrestler has three children, Charlotte, David, and Megan. His son Reid passed away in 2013.

The 16-time world heavyweight champion is a legend in his own right and while his kids look up to him as a wrestler and a superstar, they also know a different side of him that fans didn’t get to see or experience: dad.

Here is what you need to know about Ric Flair’s kids:

1. Ric Spent a lot of Time on the Road When His Kids Were Young

Ric had two children with his first wife, Leslie, and two children with his second wife, Elizabeth. Although he found time to start a family, he spent most of his time on the road, leaving his children at home to be raised by their mothers (Ric was married two more times with both relationships ending in divorce, but didn’t have any more children).

Despite rumors of a divide between sets of children, Flair’s kids have often photographed together, especially at special events honoring their dad. His two girls, Megan and Charlotte, have appeared in quite a few photos together, many of which Ric has posted on his Instagram account.

2. Charlotte Flair Took After Her Dad & Joined the WWE

Charlotte’s real name is Ashley Elizabeth Fliehr. She married Riki Johnson in 2010, but the two divorced a year later. In 2013, Charlotte wed professional wrestler Bram, but their relationship ended in divorce two years later. She does not have any children.

Charlotte attended North Carolina State where she earned a bachelor’s degree in public relations. However, she didn’t seek a career in her field. Instead, she chose to get into fitness. She became a model and a personal trainer before taking up wrestling.

Ashley changed her name to Charlotte when she joined the WWE, making her official debut in 2012 at the age of 26. In her debut, Charlotte won the NXT Women’s Championship and was named the company’s “Rookie of the Year.” After spending a couple of years competing with NXT, Charlotte earned herself a spot on the WWE’s main roster. She has won the WWE Women’s Championship four times since.

Earlier this year, Charlotte’s privacy was violated when her nude photos leaked online.

One more for Reid, miss you!

Reid was found dead inside a hotel room in North Carolina back in 2013. The then 25-year old died of a drug overdose. A toxicology report found that he had heroin and the prescription drugs clonazepam (Klonopin) and alprazolam (Xanax) in his system at the time of his passing.

Reid also took a liking to his dad’s career. He started wrestling when he was just a boy and began a more serious career as an adult. He joined All Japan Pro Wrestling and made his debut in 2013. Less than two weeks later, Reid died.

“Today is a very tough day for me and my family. I loved my son very much,” Ric Flair told WBTV (via Newsday) at the time. 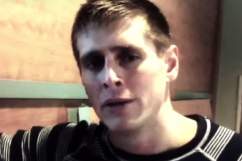 Megan was born to Ric Flair and his first wife, Leslie Goodman. Megan is known as the quiet sibling, although she does have her on IMDb page and has dabbled in the entertainment world.

“As the oldest child, Megan’s perceived as the steady, quiet one–largely because she’s never seemed to seek the spotlight for herself,” reports The Sportster.

5. David Also Wrestled for a Short While

Ric Flair welcomed his first son, David (pictured far right), with his first wife, Leslie Goodman. He was born in March of 1979 in Minnesota. Although he always wanted to be a police officer, David gave the family business a shot, competing in the WCW for about two years. After that, he competed in the WWE, but ended his wrestling career officially in 2002 (his last appearance was in on WWE Smackdown!).

David was previously engaged to Stacy Keibler, a.k.a. Miss Hancock and ex-girlfriend of actor George Clooney. He is currently married; his wife’s name is Robin.