Oklahoma senior quarterback Baker Mayfield was understandably excited after he led the Sooners to an upset victory of No. 2 Ohio State on Saturday.

Mayfield, who went 26-for-34 for 287 yards and 3 touchdowns in the 31-16 victory, ran over to the Oklahoma band with his teammates to celebrate the win. He was handed an OU flag, which he waved to cheers from OU fans that made the trip to Columbus. Mayfield sprinted around the sideline at the Horseshoe with it and eventually made his way to the center of the field.

Surrounded by his teammates, Mayfield moved to the OSU logo, waving the flag before abruptly planting it directly into the ground.

Watch a video of Mayfield’s brazen move below:

Mayfield solidified himself as one of the top early-season candidates to take home the Heisman Trophy with his performance. The Sooners, 7-point underdogs in the game, were down 13-10 in the third quarter when everything started to click for Oklahoma’s offense. Led by Mayfield, they scored 21-unanswered points to move ahead and glide to the huge victory.

The two teams played last year in Norman, and the Buckeyes dominated to the tune of a 45-24 score in front of a sold-out crowd of almost 90,000 people.

Leading up to this year’s meeting, Mayfield said the game meant a lot to him after the way things played out a season ago, adding that it “stung” to see the Buckeyes celebrating on the Sooners’ field.

So far, Mayfield’s been magnificent at quarterback. Last week in a 56-7 victory against UTEP, Mayfield was almost perfect, going 19-for-20 for 329 yards and 3 touchdowns. He’s thrown for over 3,000 yards each of the past two seasons and headed into his final season at OU with a chip on his shoulder.

Before the game, OddsShark had Mayfield at (+300) odds to win the Heisman, behind Louisville quarterback Lamar Jackson (+400) and USC quarterback Sam Darnold (+600). 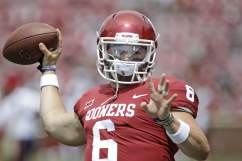