With his Monday Night Football debut finally here, ESPN’s newest sideline reporter appeared extremely nervous and flubbed over many of his lines during his inaugural report.

It happened during the first quarter of the Los Angeles Chargers and Denver Broncos game, and Sergio Dipp was given the task of hyping up Broncos coach Vance Joseph, who was also making his regular-season debut.

The broadcast flashed to an eager Dipp on the sideline, who was set to deliver a 30-second background piece on the coach. What transpired, though, is something that will live in internet lore and undoubtedly be played and replayed over and over again. Unfortunately, Dipp appeared anxious, fumbling over his lines and sounding as if he was reading off of a teleprompter.

“Folks, it’s a pleasure to be with you guys, here, on the field, from up close just watching coach Vance Joseph from here, watch him now on the screen,” Dipp said as ESPN’s camera flashed to Joseph. “His diversity and his background is helping him a lot tonight. The quarterback at Colorado, defensive back in the NFL and here he is having the time of his life this night making his head coaching debut.”

Watch a video of Dipp’s sideline report below:

Dipp seemed to reply to the incident on his Twitter account a short while later in the form of two emojis.

Dipp is a 29-year-old native of Mexico and started working in sports media in 2009 for the sports section of La Aficion in Milenio Television. He’s been a frequenter on international coverage of the NFL Super Bowls and some NBA All-Star Games and was the commentator of the Mexican men’s national soccer team during the 2012 Summer Olympics in London.

Dipp attended from Tecnologico de Monterrey in Mexico and graduated with a degree in communications. He started working for ESPN in 2013 and was later brought on to many international NFL broadcasts. He also appeared as an anchor of ESPN’s Mexican version of SportsCeter on a few occasions.

I AM ADDICTED TO SERGIO DIPP

We go back now to Sergio Dipp… pic.twitter.com/0a1wp3R5cY

Ken Bone needs to give his red sweater to Sergio Dipp. We have a new king.

Sergio Dipp: How do you guys think my first update went???

We're 10 minutes away from

"17 times we were all Sergio Dipp" 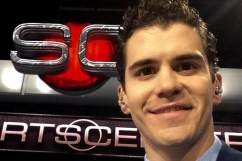