Getty The Patriots put on a dominant performance against the Falcons.

It has been an interesting start to the season. There are no undefeated teams, and the Eagles are the lone team with only one loss. The NFL has long preached parity, and this season looks to be the epitome of just that. While there are good teams in the league, no team looks to be dominant.

Kansas City has lost two straight games, and their latest loss to the Raiders bumps them out of the top spot in our power rankings. The Cardinals are the latest team to suffer a serious injury as quarterback Carson Palmer suffered a broken arm that likely sidelines him for the rest of the season.

Fans tuning into Sunday Night Football saw a vintage Patriots performance. New England imposed their will on the Falcons, who were never really in the game. The Patriots had their best game of the season, and quieted some of the doubts people had about their defense.

Here’s a look at our latest NFL power rankings for Week 7.

GettyCarson Wentz has helped lead the Eagles to the best record in football.

No. 2 Philadelphia Eagles: There’s nothing better than sitting back on Sunday and watching other teams lose. Philadelphia came out ready to play on Monday Night Football handing the Redskins a loss for the second time this season. The Eagles are the lone NFL team with just one loss. Carson Wentz has looked like one of the best quarterbacks in the league as the red-hot Eagles have won four straight.

No. 3 Pittsburgh Steelers: It’s difficult to know which Steelers team you are going to get. Pittsburgh has had more good days than bad days. For the Steelers to emerge as a true contender, we need to see more consistency. The Steelers have put together two straight weeks of strong performances against the Chiefs and Bengals. Pittsburgh has a big upcoming Sunday Night Football matchup with the Lions, which could extend their win streak to three games.

No. 4 Kansas City Chiefs: We gave Kansas City a pass when they lost one game. Their loss to the Raiders on Thursday Night Football pushes their losing streak to two games. While the Raiders and Steelers are both solid teams, the Chiefs no longer look like the NFL’s best team. With wins over the Patriots, Eagles and Redskins, it is hard to discredit them too much. Kansas City will look to get back on track on Monday Night Football against the Broncos.

No. 5 New Orleans Saints: After starting 0-2, the Saints are the hottest team in the NFL. New Orleans has won four straight games as Drew Brees and the offense are hitting their stride. The Saints have taken it to the NFC North with wins over the Lions and Packers the last two weeks. New Orleans has another winnable game coming up next week against the Bears.

No. 6 Seattle Seahawks: Stop us if you’ve heard this before. The Seahawks survived a slow start and suspect offensive line play early on to come away with a sizable victory over the Giants. Seattle has been in their share of close games, but have now won three straight games. It would be interesting to see a Seahawks performance where they are able to put four quarters together. The Seahawks take on the Texans next week.

No. 7 L.A. Rams: The Rams proved they are the new class of the NFC West as they routed the Cardinals 33-0. Arizona was once a division contender, but have taken a step back over the last two seasons. Meanwhile, head coach Sean McVay has ignited a once struggling franchise. Los Angeles has won four of their last five games including wins over the Cowboys and Jaguars.

No. 8 Buffalo Bills: Buffalo does not have the longest win streak, but to put it in college football terms they have great “quality wins.” The Bills escaped Week 7 with a narrow win over the Bucs. Buffalo also has wins over the Falcons, Broncos and Jets. The Bills will be tested next week as they take on the Raiders.

No. 9 Minnesota Vikings: After starting the season 2-2, the Vikings have won three straight games. With Sam Bradford hurt, Case Keenum is getting the job done. The Vikings have wins over the Ravens, Packers, Bucs and Saints. Minnesota will be favored to continue their win streak as they take on a win-less Browns team.

No. 10 Miami Dolphins: No doubt the most surprising team on the list, yet the Dolphins continue to win. Miami was able to survive Jay Cutler getting injured, and leaving the Jets game. The Dolphins have won three straight games with wins over the Titans, Falcons and Jets. The Dolphins face a short week as they go on the road to face the Ravens on Thursday Night Football. 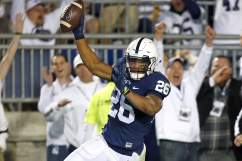