The Week 11 version of Sunday Night Football features an important NFC East matchup, as the Philadelphia Eagles, owners of the best record in the NFL, return from their bye to take on the Dallas Cowboys.

Kickoff is scheduled for 8:30 p.m. ET and will be broadcast nationally on NBC. If you don’t have cable or can’t get to a TV, you can watch NBC live online, on your tablet or on another streaming device via one of the following cable-free, live-TV streaming services. They cost a monthly fee but all come with a free trial, so you can watch tonight’s game for free if you’re in a select market:

DirecTV Now: NBC (live in 15 markets) is included in all four channel packages, ranging from $35 to $70 per month. It comes with a free 7-day trial, and you can watch on your computer via your browser, or on your tablet or streaming device via the DirecTV Now app

FuboTV: NBC (live in 11 markets) is included in the “Fubo Premier” channel package, which is $19.99 per month for the first two months and $39.99 per month after that. It comes with a free 7-day trial, and you can watch on your computer via your browser, or on your tablet or streaming device via the FuboTV app

Sling TV: NBC (live in 11 markets) is included in the “Sling Blue” channel package for $25 per month. It comes with a free 7-day trial, and you can watch on your computer via your browser, or on your tablet or streaming device via the Sling TV app

While the Eagles will hold a comfortable lead over Dallas in the NFC East no matter what happens on Sunday night, getting a win is not only important for potential home-field advantage throughout the playoffs (the Vikings, Saints and Rams all have two losses), but also for pride.

“I can remember back when I played here in ’99, all week long it was like ‘I don’t care what else happens the rest of the year, you’ve got to beat the Cowboys,'” said Eagles head coach Doug Pederson. “That’s the mindset of the city.”

Fortunately for the Eagles, they’re catching their NFC East rivals at the right time, as the Cowboys will likely be without Ezekiel Elliott (six-game suspension), Tyron Smith (groin) and Sean Lee (hamstring). And while ‘Zeke puts up the most noticeable numbers, the loss of the latter two may be even more critical.

The ‘Boys were obliterated by Adrian Clayborn and the Falcons for eight sacks without Smith last week, and now they have to face a dominant Eagles D-line that has racked up 25 sacks on the year. And then there’s Lee, who is the heart of Dallas’ defense–the Cowboys are allowing 3.5 yards per carry with him on the field this year and 5.3 with him on the sideline.

“We know what Sean means to our defense, of course – let’s not take that away from him. He’s an All-Pro,” Cowboys linebacker Justin Durant said. “It’s going to be tough when an All-Pro player of his caliber is out, but you can’t use that as an excuse. You have to go play the game.”

Home-field advantage always has the power to sway these types of heated intra-division rivalry games, but that’s a lot for Dallas to overcome, especially against a red-hot Eagles team that has won seven in a row and is one of just four teams in the NFL to rank in the Top 10 in both offensive and defensive efficiency, per Football Outsiders’ metrics.

Dak Prescott will make enough plays to keep it close, but ultimately, Philadelphia will be too much for the injury-riddled Cowboys. 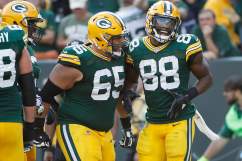