The Orange, Cotton, Peach & Fiesta Bowls are this year’s non-playoff New Year’s Six games. The Cotton Bowl features USC and Ohio State. Ohio State was close to making the College Football Playoff, but the committee preferred Alabama’s resume over Ohio State. The Buckeyes had two losses this season, including a 31-point loss to Iowa, which likely kept them out of the playoff. Ohio State was still a team coveted by all the major bowls. The Cotton Bowl kicks off December 29 at 8:30 p.m. Eastern on ESPN.

UCF and Auburn will battle in Atlanta in the Peach Bowl, one of the few matchups to stay true to bowl projections. The Peach Bowl kicks off a New Year’s Day full of great bowl matchups with a 12:30 p.m. kickoff on ESPN. UCF is in a bit of a unique position as Scott Frost just took the Nebraska job, but is expected to coach the bowl game. Auburn just locked up Gus Malzahn, so it will be without the coaching distractions UCF may have. Auburn is favored by 9.5 points over the lone undefeated team in the country.

In the College Football Playoff matchups, Alabama is taking on Clemson in the Sugar Bowl, while Oklahoma squares off with Georgia in a non-traditional Rose Bowl matchup. Click here to see the full college football bowl schedule for 2017-18.

Here’s a look at the complete schedule for the New Year’s Six games. 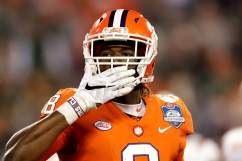 Read More
College Football, Football
Find out the latest on the New Years Six bowl matchups including the Peach, Fiesta and Orange Bowls.