Mustafa Guyton, 29, has been identified by the Philadelphia Police Department as the suspect in the brutal beating of a blind man on October 2. The incident occurred in the Northwest Germantown section of Philadelphia. The attack on the 33-year-old blind man occurred in broad daylight just after noon.

Surveillance footage of the violent incident, which you can watch above, went viral this week as police searched for information on the suspect. 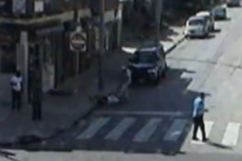 Here is what you need to know about Mustafa Guyton:

1. Guyton is Still on the Loose

Police are still looking for Guyton, who was last seen wearing a tan baseball cap, tan shirt, khaki pants and a dark-colored backpack. The Philadelphia Police Department is asking for help in tracking him down and are warning people not to approach him if he is seen.

Public documents reveal that in 2006, Guyton was arrested in Delaware County, Pennsylvania. He was charged with aggravated assault, firearms carried without a license, and possession of a controlled substance.

See the document below:

He was also arrested for assault and various other charges in 2004. Read his entire criminal history in the document below:

4. The Victim May Have Been Robbed During the Assault

Philly.com reported that the victim was robbed during the vicious attack. Although other news outlets are reporting that there is no known motive for the attack in which the 33-year-old blind victim was knocked down and repeatedly kicked in the head.

5. There Were a Number of Witnesses

At least three witnesses saw the brutal attack and did nothing. Their negligence has received a lot of criticism on the internet as the popularity of the video has grown.

Loading more stories
wpDiscuz
1
0
Would love your thoughts, please comment.x
()
x
| Reply
Philadelphia police have identified Mustafa Guyton as the suspect in a brutal assault of a blind man that spawned a viral video. He's still on the loose.