A 15-year-old kid in Montana was shot in the head by his friend in tragic accident. The victim has been named as Mackeon Schulte of Billings, Montana. The tragic accident happened at around 2:30 a.m. on May 17. His friend, 17, hasn’t been named yet by police and no charges have been filed.

1. Police Say the Shooter Was ‘Scared’

Police in Billings said that the shooter was spooked when Schulte and another friend when to wake him up at 2:30 a.m. They began throwing pebbles at their friend’s bedroom window, reports the Billings Gazette. He shot Schulte in the head with a gun he kept by his bed. The shot was fired through a window. The other boy was not injured during the incident. Billings Police Chief Rich St. John said in a statement the shooter was “scared” when he opened fire.

2. The Local Community Are Referring to it as a ‘Huge Tragedy’

Schulte was a student at Billings Senior High School, according to his Facebook page. Speaking to the Billings Gazette, a district superintendent, Terry Bouck, said “This is a huge tragedy for Senior High and the district. We’re just doing the best we can to make sure everyone is OK throughout this situation.”

3. The Shooter Could Still Face Charges

KTVQ reports that prosecutors and the Billings Police Department are meeting to discuss is charges will be brought against the 17-year-old in the case. Local police Captain John Bedford told the station “We have to investigate at this point for what it is but it’s a tragedy all around.”

4. He’s a Native of Colorado

His Facebook page showed Schulte to be a typical teenager with a passion for video games, especially the Call of Duty series as well as M&M candies. According to his sister, Kylen, the family are from Vail, Colorado but now live in Billings.

5. Friends & Family Have Been Paying Tribute to Schulte on Social Media

Friends have been paying tribute to Schulte on social media. One friend, Will Pavek, wrote on Facebook “I’m glad to knwo what happened but at the same time…I wish I never knew…I miss you buddy.” Meanwhile a cousin of Schulte’s from Ireland wrote on Twitter “Praying for my Schulte family in Montana, dealing with this tragic loss. Such a shock. RIP MacKeon. Xx.” 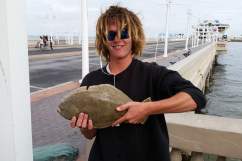 Loading more stories
wpDiscuz
1
0
Would love your thoughts, please comment.x
()
x
| Reply
A 15-year-old kid in Montana was shot in the head by his friend in tragic accident.