Former President Ronald Reagan died more than 10 years ago, on June 5, 2004, at his home in Los Angeles, California, according to his presidential library. He was 93.

His wife, former first lady Nancy Reagan, died on March 6, 2016, of congestive heart failure, also at their Los Angeles home. She was 94.

Ronald Reagan, the 40th President of the United States, suffered from Alzheimer’s disease for several years before his death, according to CNN.

He was buried at his presidential library in Simi Valley, California, where his wife will also be buried. Despite her own failing health, Nancy Reagan visited his gravesite on the 10th anniversary of his death in June 2014.

“Though frail and confined to a wheelchair, she looked as elegant as Americans probably remember her from her heyday as a fashion icon in the 1980s,” the Los Angeles Times described. “She wore a cream-colored pantsuit, meticulous hairdo and gold lion door-knocker earrings by her favorite costume jewelry designer, Kenneth Jay Lane.”

Ronald Reagan was buried following a seven-day state funeral. His casket was flown to Wsahington D.C. for a service, public viewing and tributes at the U>S. Capitol.

Funeral plans for Nancy Reagan have not yet been announced. The Ronald Reagan Presidential Foundation & Library says there will be an opportunity for the public to pay final respects at the library prior to her funeral service. 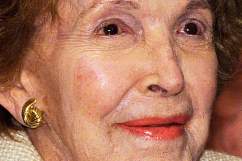