Vice President of the United States Mike Pence attended the State of the Union address on January 30, 2018, with his wife, Karen.

Born in Columbus, Indiana, Pence has a background in law and in talk radio, hosting a political talk show in Indiana from 1995 to 1999. His political career began in 2001, when he was elected to serve in the U.S. House of Representatives. In 2012, he became Indiana’s governor when he defeated his Democratic opponent John Gregg.

Pence and his wife have been married for more than 30 years, and they have three children together, one son and two daughters.

1. His Family Has Been Heavily Involved in His Political Life

Mike Pence and his family attend the Indianapolis 500. (IN.gov)

Pence’s wife and kids have not been passive players in his political career. Instead, they’ve been rather hands on, going with him from campaign stop to campaign stop, handing out flyers, making calls, and helping him get elected governor of Indiana.

Still, the kids say that their lives haven’t been anything too abnormal, despite the fact that their father is a famous politician.

The former governor also said that keeping his family close together has been the most important accomplishment of his career.

“This has always been a family affair for us, from the very first campaign headed out to county fairs, while Karen and I would be shaking hands at the Republican tent, the kids would be standing out in front of the tent, handing out flyers and shaking hands,” he said.

2. His Wife Is a Former School Teacher

Mike Pence married his wife, Karen, in 1985. Karen worked as a school teacher for 25 years.

She studied Elementary Education at Butler University and, when she was the first lady of Indiana, she made education one of her priorities; she frequently traveled the state and visited schools, according to IN.gov.

She also founded the Indiana First Lady’s Charitable Foundation with the goal of supporting youths and families around the state.

Karen is passionate about art as well, painting watercolors of homes and of historical buildings in her free time. One thing she isn’t a fan of is the spotlight that comes with being the wife of a politician, but Karen says she decided she simply had learn to get over this aspect of politics.

“You know, [former Indiana First Lady] Judy O’Bannon told me, ‘Just get over it. Just get over it,’ so I am taking her advice,” she said before Pence was sworn in as the governor of Indiana. “I am just going to get over it and realize the never four years we are going to be in the public eye and we want to make the most of it.”

Pence’s oldest son is Michael Pence. Michael attended Purdue University in Indiana, and studied to be a pilot, according to WTHR.

After graduating from Purdue, Michael decided to join the Marines, and in 2015 he became a second lieutenant, The Marine Corps Times reports. Michael’s parents attended a ceremony in Quantico at the time, during which their son was officially commissioned.

“Karen and I are just very proud of our son and what he’s accomplished,” Pence said. “So with lots of Kleenex nearby, I will be on the East Coast welcoming Second Lieutenant Michael J. Pence into the service of this country.”

Michael met his wife while in college (they both attended Purdue). You may have seen Whiteside at various campaign events, including the Republican National Convention, and at President Donald Trump’s inauguration.

In October 2017, Pence flew to Indiana for a belated wedding reception for Michael and Sarah, according to the Indy Star.

4. His Daughter, Charlotte, Is a Filmmaker & Is Releasing a Children’s Book in March 2018

when your bunny has more followers than you ?? ? ~link in bio to check out our BOOK!~

Pence’s oldest daughter is Charlotte Pence, who studied Digital Cinema and English at DePaul University, graduating in 2016. She created several documentaries during her time at the school.

Charlotte has worked as a freelance producer for WFYI, a media company in Indianapolis, Indiana. During her time at WFYI, she worked on the documentary Fleeced, a film about elderly people being targeted by scam companies. The documentary went on to win an Emmy award that year.

Pence is also an excellent writer, having published essays on websites like Thought Catalog. One from 2014 discusses her feeling of being looked down upon by young people her age because she believes in God.

“I’m okay with the fact that we can all agree to disagree – that we can all admit that there seems to be something unexplainable at work,” she writes. “However, what I cannot accept is the warped reality in which we all seem to be newly accustomed to living. We seem all too comfortable with making the grand assumption that ‘nobody believes in God, so let’s all just not talk about it.’”

Charlotte recently penned a children’s book titled Marlon Bundo’s Day in the Life of the Vice President. Karen Pence did the illustrations for the book, which is slated for release on March 19, 2018.

“From the moment he hopped into the home of America’s “Second Family,” black-and-white bunny rabbit Marlon Bundo captured the hearts of Vice President Mike Pence, his wife Karen, and his children Michael, Charlotte, and Audrey. But little Marlon Bundo isn’t just a family pet: like Peter Rabbit and Bugs Bunny before him, Marlon—or BOTUS (Bunny of the United States)—is a national celebrity! With his appearances at official White House events, his rides on Air Force 2, and his popular Instagram account, Marlon Bundo has become a beloved member of the Trump-Pence administration,” reads Amazon’s description of the book, in part.

5. His Younger Daughter, Audrey, Is a Social Liberal

Look who Audrey and I met while Christmas shopping in downtown Indy… Misfit the Reindeer! pic.twitter.com/GqSGRybuS3

Pence is a rather conservative guy, especially when it comes to social issues, as he has been a staunch opponent of same-sex marriage all throughout his political career. However, not every member of his family is in agreement with him when it comes to his politics.

His youngest daughter, Audrey Pence, describes herself as socially liberal, according to WTHR. Politically, she said she is independent and voted split-ticket during the first election in which she could participate.

However, her father does not scorn her for not seeing eye-to-eye with him. Rather, Audrey says that the governor is proud that she was able to form her own beliefs.

“Probably the person I get the most respect from is my dad on that and he has always…he tells me so many times, ‘I am proud of you for having your own opinions and looking into things,'” Audrey said.

Of course, she did vote for her father in his gubernatorial election. 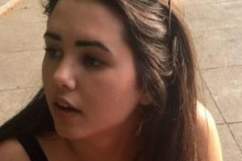 Loading more stories
wpDiscuz
11
0
Would love your thoughts, please comment.x
()
x
| Reply
Mike Pence is the vice president of the United States. He and his wife, Karen, are parents to three kids; Charlotte, Michael and Audrey. Here is what you need to know.