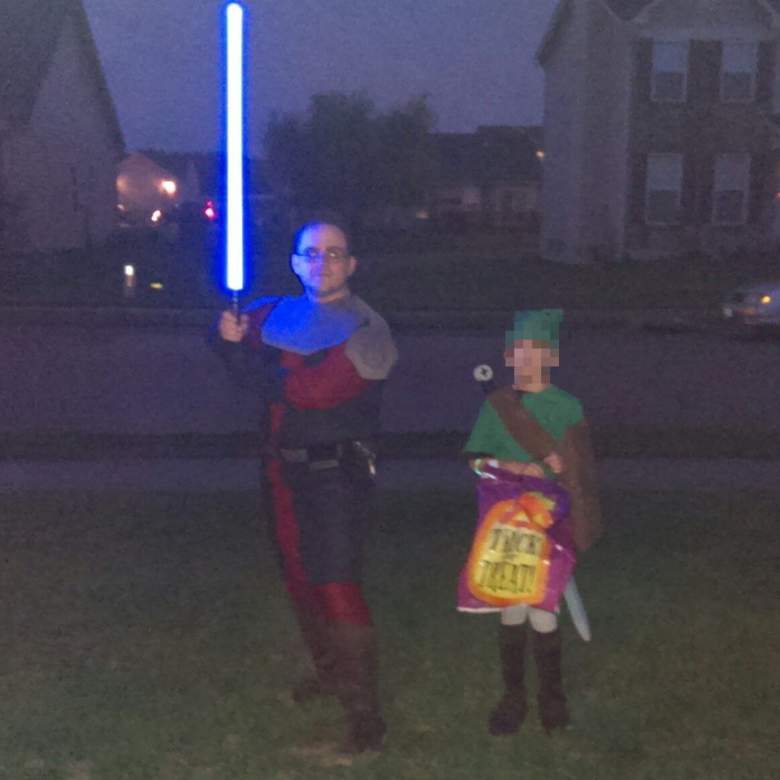 Kenneth “Ken” Bone is the cuddly looking “uncommitted voter” in the red sweater who asked a question at the second presidential debate and immediately became an internet legend.

He’s also a coal plant operator who works long days, thinks his wife is hot, and wielded a lightsaber for Halloween one recent year (see above).

The hashtags #KenBone, #KenBoneFacts, #KennethBone4President and even #KennethBoneMovieTitles all trended on Twitter, and people announced they were dressing as Ken Bone for Halloween.

The unassuming “every man” voter had become an internet sensation overnight, a less polarizing “Joe the Plumber” figure, and perhaps a testament to voter exhaustion with the theatrics on stage. This was the kind of thing people were posting, when they weren’t calling Bone a hero, a national treasure, and urging him to run for president in 2020:

Mustached,
Red-sweatered,
A benevolent buddha,
O #KenBone
You rise like a fiery Phoenix
From the ashes
Of American civility:
Lead us home.

Tonight we are all #KenBone

Pretty soon, Ken Bone found himself the subject of endless memes, talking to national news reporters, and appearing on the Jimmy Kimmel show. In interviews, he told the Belleville News-Democrat, “I hope some good old fashion Midwestern good humor will help us get engaged in the political process instead of all the divisive rhetoric.” Snoop Dogg even said he wanted to hang out with Bone.

But who is Ken Bone?

1. Ken Bone Is a Coal Plant Operator From Illinois Who Works 12-Hour Shifts & Gushes About His Wife

Some people mistakenly assumed Ken Bone was a pizza manager from Missouri, but that was the wrong Facebook page. Bone is a coal plant operator from Illinois, according to The New York Times, which said he “works 12-hour shifts sitting in the control room of a coal-fired power plant.”

ABC said the plant where Bone works is in Southern Illinois. Bone’s Facebook page says he is a plant technician at Prairie State Generating Company who graduated from ITT Technical Institute. He wrote on Facebook of his job, “Keeping your lights on and the air clean at the same time.”

In 2011, Bone wrote on Facebook, “Been on midnight shift this week.” He added that his son “tells me ‘Dad, if your work makes you sleep all day and work all night they should pay you more money.’ Amen brother, such wisdom from a child.” (He has said he was leaning toward Donald Trump for economic reasons).

Bone appears to be taking all of the hoopla in stride. He agreed with one Twitter user who opined that he probably had a hot wife.

He frequently lavishes his wife with praise on Facebook, once writing, “Looking over Lake Michigan with the woman I love. Amazed at what a strong, beautiful wife God has blessed me with.” He also frequently posts about his young son.

He also said on Twitter that his wife dressed him in the now famous outfit he wore to the debate, especially the bright red sweater. The Belleville News-Democrat newspaper says that Bone’s wife is named Heather, and he lives in Shiloh, Illinois. As to who dressed him in the iconic red sweater and whether she imagined he would become a “living meme,” he reveals:

According to the Times, Bone is 34-years-old and was chosen to ask a question in the debate because he participates in the Gallup poll. His age means he’s not able to run for president – yet. His Facebook page says he is originally from Granite City, Illinois.

2. Ken Bone Is Still an ‘Uncommitted Voter’ but He Made Controversial Comments on Reddit About Trayvon Martin & Pregnant Women

Bone told The New York Times that he had been leaning toward voting for Donald Trump but was impressed by Hillary’s “composure” during the debate.

He’s still not sure who he’s voting for, though, the Times said. That’s right: He’s still uncommitted, a microcosm of the exact voter that both sides desperately are trying to court.

He did get to shake Bill’s hand, though.

Bone told the Belleville newspaper he thinks Trump will be better for him economically, but he’s worried that Trump would appoint Supreme Court justices who would erode rights. Hence, his hesitation.

The internet is going crazy for Bone. Many people feel he won the debate and should run for president.

Bone’s wife has posted several of his post-debate appearances and debate photos on Facebook, sparking commentary from family and friends. Comments include, “Awww he did so well ?” and “I just told my wife, ‘I went to school with that guy!’ – Go Ken!” One writer noted that, on the Internet, people “compared him to Abe Lincoln and jfk.”

However, after Bone did an AMA on Reddit following all of the hoopla, Reddit followers realized he had posted using an old account and started sifting through his commentary, said GQ.

GQ reported that Bone called pregnant women “beautiful human submarines,” and called the Trayvon Martin shooting “justified,” while also referring to George Zimmerman as a “bad guy,” according to a now deleted post.

The New York Daily News said Bone made the comment about pregnant women “on an NSFW thread called ‘PreggoPorn,’ and ruminated about the sexual benefits of getting a vasectomy.

TMZ reported that Bone feels his comments on Martin were taken out of context and adds that the comments “regarding Trayvon was merely him recapping the Department of Justice’s report on the case. ‘Legally justified’ were the report’s words … not Ken’s. KB says his personal feeling is … just because it was justified, doesn’t mean it was right, and he absolutely believes Trayvon’s death was a tragedy.”

According to TMZ, Bone feels people are “trying to take him down.” He also told TMZ he wanted to apologize to Jennifer Lawrence for having admitted he liked her hacked photos because he understands now what it’s like to lose one’s privacy. 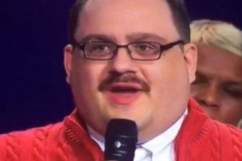 Kenneth Bone: The Debate Tweets You Need to See

3. Bone Was Going to Wear an Olive Suit Instead of His Iconic Red Sweater but His Pants Split

A man hasn’t been so famous for a sweater since Mr. Rogers. One thing that made Bone so memorable and such an Internet hit: His cuddly red cable knit cardigan, with buttoned-down white shirt underneath (matched with Khaki slacks).

Bone bought the sweater at Kohl’s in Wausau, Wisconsin, according to Good Morning America, which quoted him as saying he’s open to helping the store promote sweaters or auction the garb off. He said he hopes to use his fame to encourage people to vote, Good Morning America said.

Bone told CNN the sweater was almost the legend that didn’t happen.

He was going to wear an olive suit instead, but he split his pants that morning because he gained 30 pounds. The sweater was “Plan B,” he told CNN on Monday morning while, again, wearing the red cardigan.

#KenBone is the hero we need right now, but not one we deserve. #KenBone2016 https://t.co/6nHJb5ucI4

“Apparently I’ve gained about 30 pounds and when I went to get in my car the morning of the debate I split the seat of my pants all the way open,” Bone said to CNN. “The red sweater is plan B. I’m glad it worked out.”

He told the Belleville News-Democrat: “This was an emergency wardrobe change, facilitated by my wife. It was the nicest thing I owned that I could put on in 30 seconds.”

Bone said that his red sweater is “now more famous than me,” CNN said.

4. Bone Asked a Question About the Country’s Energy Policy & Used to Have Seven Twitter Followers, Two of Whom Were His Grandma

Before he asked his now famous question, Kenneth Bone had a grand total of seven Twitter followers, he told CNN, and two were his grandmother. “I am not sure why they care about what I have to say but I’m glad they’re engaged in the political process,” he told CNN of his followers.

Bone opened his Twitter account in 2013. There are fake sites out there, but, according to ABC News, the real Ken Bone tweets at @KenBone18. As of 8:30 p.m. central time, he had more than 55,000 Twitter followers. He’s only Tweeted 18 times, but he’s been retweeting some people’s comments on his new Internet celebrity. He even retweeted this:

Well. That was that.

On Facebook, Bone’s public posts aren’t political in nature. Instead, he posts about hockey and baseball games, his wife, his child, his parents, painting his house, and Halloween candy. He writes things like, “is using his new snow shovel for the first time on his first driveway! It got old fast.”

In one of his only issued-oriented posts, he shared a story on the murder of a pizza delivery driver and wrote, “Where is the outrage for this young man? Gunned down in brutal fashion for the few dollars he might have had in him. Our community as a whole needs to demand peace, not just one segment of it.”

Bone’s cover picture on Twitter is of a baseball game.

While the candidates – Trump and Clinton – bickered on stage, refused to shake hands at the onset of the debate, and trashed each other’s temperament and character, Bone posed a question that was refreshingly substantive and issues-focused (and not on the Billy Bush tape or Bill Clinton’s past).

What steps will your energy policy take to meet our energy needs while at the same time remaining environmentally friendly and minimizing job loss for fossil power plant workers?

Bone’s question came at the tail end of the 90-minute debate, which helped make it more memorable because so many people were exhausted by the negativism of the whole thing by that point.

5. Bone Carried a Lightsaber for a Past Halloween & Some People Are Dressing Like Bone on Halloween 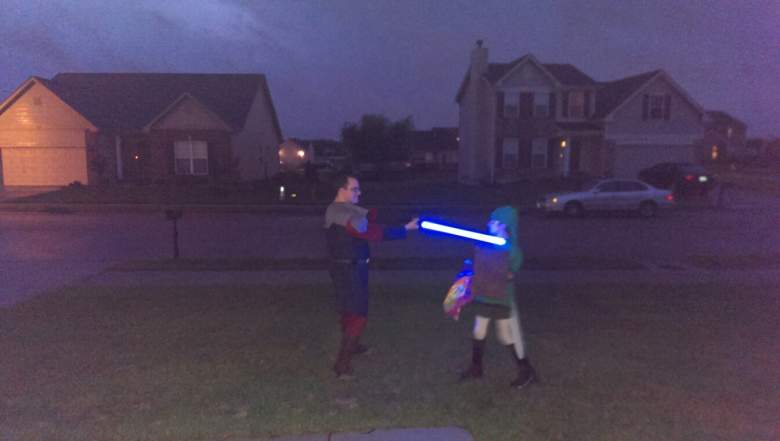 Not knowing that some people would regard him as a super hero, Ken Bone’s Facebook profile picture shows him, literally, dressed as a super hero. (Facebook)

Ken Bone Halloween costumes will be a big thing, judging from the number of people promising on Twitter that they are going as Ken Bone. Chicago Patch says that Bone’s famous red sweater has already sold out on Amazon.

But if you go as Ken Bone for Halloween, don’t forget the disposable camera. Twitter sent videos of Bone snapping photos on the debate set with a disposable camera viral, so it’s a key part of his look. The other items you need: A bushy mustache, glasses, Khaki slacks, a white buttoned-down shirt, a black microphone and, of course, the red sweater.

He's single-handedly going to get disposable cameras back in style. #KenBoneFacts https://t.co/QfTdVXUL93

Time will tell whether Bone will extend his 15 minutes of fame or go down in history as a brief Internet legend. An even better question: What is Ken Bone going to be for Halloween? 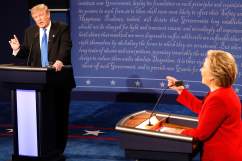 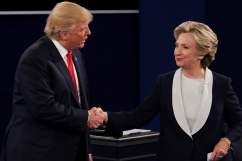