The Chilean Navy just declassified footage of a UFO that seems to defy explanation. In a nine-minute video from 2014, which you can watch above, the unidentified flying object is shown displaying very unusual behavior that experts are having a tough time deciphering. Is this a bonafide alien UFO, an experimental aircraft, or something else? What exactly are we looking at?

The video was taken on November 11, 2014, when a Chilean Navy helicopter west of Santiago was flying at 4,500 feet on a clear day, in the afternoon, Huffington Post reported. The temperature was 50 degrees Fahrenheit and they were flying at 132 knots (152 mph). The men on the helicopter saw an object flying about 35 to 40 miles away, at about the same velocity and altitude that they were flying. They zoomed in with the infrared camera and contacted two radar stations, who could pick up the helicopter on their radar but could not detect the object even though it should have been within range. There were also no reports of civilian or military traffic. On-board radar also couldn’t detect it. The pilot attempted to communicate with the object but got no reply. Most of the film was taken in infrared, with the black, white, and grey tones related to heat. The hotter the object, the darker it appears on the video.

The witnesses were a Navy Captain with years of flying experience and a Navy technician. The CEFAA (Comité de Estudios de Fenómenos Aéreos Anómalos), Chile’s government agency that investigates unidentified phenomena, has been studying this for two years, Huffington Post reported. A committee of military experts and professionals have not been able to reach a consensus about what this object is.

The UFO Was Flat & Elongated with a Semi-Oval Shape

The Captain described the object as:

Flat and elongated… (with) two thermal spotlights like discharges that did not coincide with the axel of motion.”

According to the technician, the object was:

…White with a semi-oval shape on the horizontal axis…”

Below, you can see a clip just showing the object in motion:

The discharge that you see in the video appears to be a gas or liquid with a “high thermal track or signal.” There were two ejections of this material. You can watch the two discharges in the videos below:

According to astrophysicist Barrera, the first ejection was much hotter (and thus darker on infrared) than the second ejection. The first discharge also seemed to come from two different parts of the craft, joining into one wake of material in the air.

Infrared allows the discharge to be seen clearly. However, to the naked eye, it would have just looked like part of the surrounding clouds. The white object also would have been difficult to see in the sky without infrared cameras, RT reported.

The Chile UFO Might Be a Twin-Engine Jetliner or a Helicopter, But the Details Don’t Add Up

French analysts proposed the object might be a medium-haul aircraft of some type, Huffington Post reported. The discharges were dumping cabin waste water, which formed a plume. They said the distance between the two hot-spots which you can see in the video appear consistent with the distance between two jet engines in that size of craft. However, this theory fails in a few areas. First, such an aircraft would have been visible on radar and air traffic control would have known about it. It likely would have answered attempts to communicate with it. And such an experienced pilot would have recognized an airplane as a possibility, if this were the case. A water discharge would have likely plummeted quickly, making the discharge in the video more likely to be a gas or energy, not water.

Some viewers on Reddit subscribe to the aircraft theory and talk about it here. One commenter who said he was a pilot (although there is no way to confirm this), wrote that the plume looks like it’s coming from a jet that’s running hot, but far away. The exhaust, commenter “thekeffa” wrote, appears to ball up behind the jet, he wrote, and the infrared makes it appear to be a round ball, disguising its shape. He explained that when flying, things can look very different from normal due to distance and speed. He suggested it might be a military twin-jet craft like an F18 or an older F-5. The commenter suggested that if it were farther away than thought, it might explain the radar issue. Another commenter, DanTMWTMP, said that a cloudy day combined with its distance and angle might account for the poor radar tracking.

Viewers on Reddit also suggested it might be a U.S. military helicopter. They say that at one point, at around 44 seconds into the video, you can almost see the helicopter’s blades: 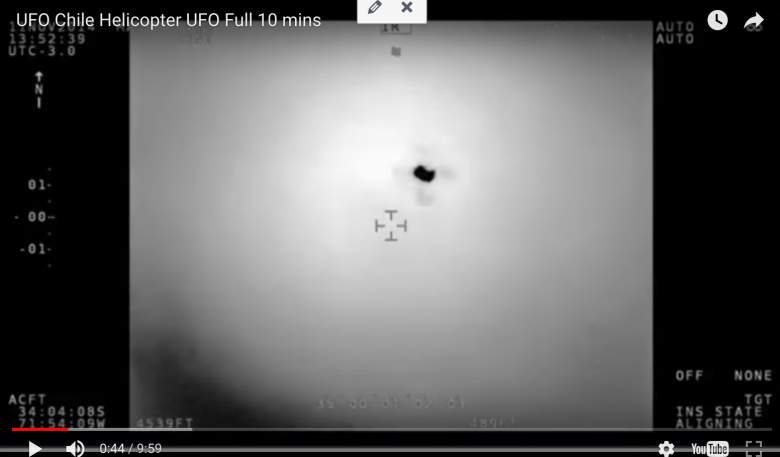 Once again, however, this doesn’t explain why it didn’t show up on radar. In addition, the two experts who saw it likely would have recognized if it were a helicopter.

It Didn’t Act Like a Weather Balloon or a Drone

Others have proposed a weather balloon, which is the most popular explanation given for unexplained flying objects. However, there were no weather balloons in the area at that time, and the movement was wrong for a balloon. At the time, the win was blowing from the west and would have prevent the type of movement seen in the video, Huffington Post reported. In addition, if it had been a drone, it would have shown up on radar. The Navy Admiral confirmed this was not a U.S. drone or espionage aircraft from another country.

Space Junk Was Not Reported in the Area

Often, sightings turn out to be space debris, but not this time. No space debris was entering that atmosphere in that location and on that day. In addition, space junk wouldn’t have floated horizontally for a period of time, like this object did. The Chilean government would have been warned about the entry of space junk, so aircraft could avoid the area.

The Object Was Three-Dimensional and Controlled Its Movements

Air Force analysts looking at the photos determined it was a real, three-dimensional object that was able to control its own movements, Huffington Post reported. Winds did not effect it. It reflected the light around it and it emitted some type of energy. The video was not a hoax or altered in any way. 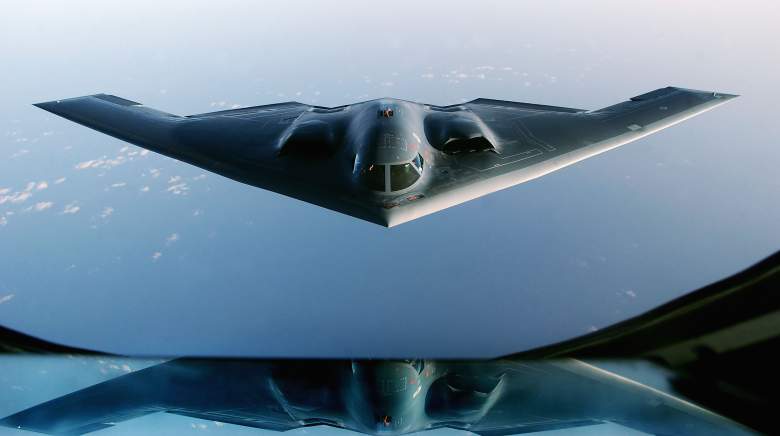 Some viewers of the video suggest this might be a type of experimental aircraft. Perhaps it really is a twin-engine jetliner or a helicopter, but it’s a stealth version that’s currently unknown. This theory certainly isn’t unprecedented. The B-2 Stealth Bomber, for example, was sometimes mistaken for a UFO before the public knew about the stealth aircraft. Sightings of triangle-shaped craft were later found to be the bomber. In fact, Popular Mechanics reported in 2009 on six aircraft that were mistaken for UFOs. These included the RQ-3 Darkstar, the U-2, the SR-71 Blackbird, the P-791, the F-117A Nighthawk, and the B-2 Spirit.

Some Believe It’s a Hoax of Some Sort

Still, some viewers believe this was a hoax of some sort. Air Force analysts studying the photos said it was definitely a three-dimensional object, as noted above, that controlled its own movements and the video did not appear to be altered in any way. However, as some have pointed out, the CEFAA were also the source of UFO sightings over El Bosque that many believe to be a hoax.

@IvorCrotty Thanks! Also, remember that CEFAA and L. Kean are the same that shared Hoax Ufo Sighting over El Bosque https://t.co/mx9H6qDR5x

The Chile government presented the video in a press conference on March 13, 2012, taken originally in November 2010. An engineer viewing videos from an Air Force Command ceremony said he thought he spotted a UFO following three groups of airplanes. Seven videos showed the UFO from different angles. Scientists from different disciplines reviewed the videos and believed it to be a UFO, the government shared. It was dome-shaped, with a flat bottom and no visible propulsion. The top reflected the sun and the bottom was darker and flat. It was flying at 4,000 to 6,000 mph, considered too fast to be man-made, and made no sonic boom. It also moved in a way that showed it to be under intelligent control. Experts ruled out meteors, birds, space junk, comets, and planes.

Later, a reporter from Huffington Post revisited the case and General Ricardo Bermudez, CEFAA Director, told her the objects didn’t seem to be a bug, but that couldn’t be ruled out 100 percent. One expert concluded the same UFO was seen in two videos and one expert said it was not the same UFO, which was one reason why the “bug” theory couldn’t be ruled out. An entomologist suggested it might be a type of ladybug, but the clear nature of the UFO versus how blurry a bug would appear made other questions this idea.

Some Think the Contrails Hold the Key

Contrails from the Chile UFO. (CEFAA)

As the Inquisitr reported, some conspiracy theorists believe the contrails seen in the video hold the key to its identity. Many conspiracy theorists believe that contrails are actually chemtrails, releasing poisonous gases into the air, perhaps even “weeding out” the sick, How Stuff Works reported. So people who believe this theory (for which there is no proof) also believe the contrails from this object might be poisonous gases. However, contrails aren’t that uncommon, so it’s likely just another sign that this is a real aircraft of some type, ejecting fuel or gases of some sort.

Another Theory Suggests It Was a Bonafide Alien UFO

Other viewers believe we are seeing a bonafide alien UFO. The fact that it defies explanation at this time and no known aircraft match its qualities lends people to this theory. Some believe it’s similar to a dumb-bell shaped MUFON UFO of other videos, but as viewers have pointed out, this is an infrared video that we’re seeing. So we’re only seeing the hottest part of the UFO, not its full shape.

This is the first time that an unidentified object was caught on a high-quality video for over nine minutes and two expert witnesses saw it. Ars Technica reviewed the video and could not be as skeptical as they typically are. They said it “falls far short” of providing definitive, concrete proof of aliens, but was very well-documented, made by credible Navy experts, and deserved additional consideration.

Considering how difficult-to-impossible it would be to see this with the naked eye, is it possible objects like these travel in the sky more than we have any idea but we just can’t see them? Because it was invisible to radar, there’s really no way to know.

Let us know in the comments below which theory you think is most credible.

Loading more stories
wpDiscuz
5
0
Would love your thoughts, please comment.x
()
x
| Reply
A strange UFO was caught on video for nine minutes in Chile. See videos and photos here, along with top explanations about what it was.